OF BARS AND ADAM'S ALE

I was robbed a while back. It was mostly cash and electronic devices. The cost of replacing it all was far above my deductible. However, since the electronic devices were more than a year old, the insurance company depreciated them to such an extent that I received no compensation causing a huge drain on my resources when it all had to be replaced.

The person who did it was caught, but of course everything stolen was long gone (and snorted up his nose.) I never met the young man who did it. The police called me once to ask for a sentencing recommendation but that was about the extent of my connection with the whole affair.

It became a defining moment for the people with whom I lived at the time. Daily a decision was made with reference to “the time we were broken into.” A certain amount of fear became part of life in the house.

Then a letter came. It was from the young man from his prison cell. Of course it expressed remorse and apologies. I still have the letter. It was instinctive that a response was needed but I could not think of a thing to say to him. 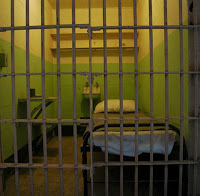 Recently I was reading Pope Benedict’s Apostolic Exhortation Sacrementum Caritatis, being completely blown away at this wonderful document, when I landed upon the paragraph concerning the care for prisoners (59). I did not expect an exhortation on the Eucharist to go in this direction but go it did. It talked about the Eucharist being made available to prisoners and to help their “faith journey” and “full social rehabilitation.” He goes on to say, “I ask Dioceses to do whatever is possible to ensure that sufficient pastoral resources are invested in the spiritual care of prisoners.” (emphasis added)

This past Monday there was a segment on NPR’s Talk of the Nation concerning restorative justice. Recognizing that our penal system is largely broken, it explained how this set of principles is trying to restore some humanity and healing. It puts the persons who are convicted of crimes in contact with their victims and lets them interact.

The person interviewed, who saw her husband murdered and her daughter raped, talked about being Roman Catholic and taking seriously the faith which states that we should forgive those as we are forgiven. “If I am forgiven,” she says, “how can I say I don’t forgive?”

The goal of these controversial principles is not only to help the victim, but to help the criminal examine his life. Most, when taken to court, see themselves as being tried against the state, not a person. Many times they have never examined their lives and do not understand the damage that they have caused. The last step is to have them accepted back into society, to be told that they are worth something.

The focus is on healing people, not simply punishing them. Think about it. What makes most people commit crimes? It usually has to do with some kind of need (legitimate or otherwise) or they feel oppressed. What does a jail sentence do? If you had a need before hand, it will be greater after. You will have less money, you will have less opportunity to get a job, you will have fewer ties to the community, you will be looked down upon more, and y 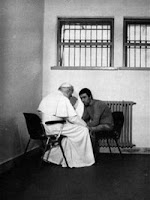 This letter appeared in a column in Tuesday’s Akron Beacon Journal:

". . . I am an ex-offender here in Akron, Ohio. . . .I have been out of trouble but now I am back in trouble. My biggiest obsticule was and still is finding employment and housing. I am tired of going know where in my life. I would like to know if you have information that would help me obtain employment and housing. I really need all the help I can get. I am trying very hard."

An advice radio host often says to wives that there are two roads that they can choose in dealing with husbands who are not sticking around the house. They can nag and make home life miserable (making him want to escape from home even more) or you can risk making home life pleasant and try to lure him back. In a similar mode if a person in trouble feels they are living against society rather feeling a part of it, what are the chances he will give two cents about “society” if he feels society does not give two cents about him?

Interestingly the recidivism rate for persons convicted of a crime where these principles are in place seems to drop precipitously. And isn’t that what we want? Victims want those who commit crimes to know what damage they have caused to real people, society wants them to experience the consequences for their deeds and to have them not do it again, the perpetrator needs to be healed and become a constructive part of society and God wants us to forgive.

Which leads me back to my letter. Isn't funny that I’m almost afraid to write it? What if it comes back with baggage? But what if it comes back from a healed young man? It seems all so risky. But, darn it, "risky" so often seems to be a part of the definition of faith.

For those interested in prison ministry, the Diocese of Cleveland has this site that might help.
Posted by Fr. V at 7:05:00 PM

Isn't it our fears about rejection, obligation, humiliation, pain (physical and psychological) which limit our loving? Or perhaps we fear that we may need to give up some of our "stuff," or time or energy. To love completely is to risk everything. Heck, loving perfectly could even get you crucified!

I once read the papal preacher to JPII was found shouted "Coraggio!" through the ceiling to the pope who was in his apartment. Maybe we need more "coraggio" to love more perfectly.

I need to learn how to read. I read "Caravaggio!" And couldn't figure out why he was shouting it - though we really could use more of the likes of him.

That aside - I agree - good observation.

I took in a homeless friend of my daughter's. She was, a year after leaving the group home, losing her license, then her car, then her job, then her apartment, then unable to pay back city money, etc., sleeping under a railroad trestle after running out of friendly sofas, subsisting on sugar and condiment packets from restaurants, and God only knows what might've been next, because when I picked her up, she was high as could be, nodding, and then very very hungry and thin. We (daughters and I) rearranged the upstairs and gave her her own room for her 19th b-day. She fixed it up herself, stayed with us a year, then eventually went into Job Corps and got a trade - and began a family with a wonderful guy. Their son is the joy of their lives.

But she was the lucky one. While she was here, she was her little brother's only family contact. He was in jail, as was big brother. They'd all been farmed out early and given up and group-homed (split, sometimes) because Dad was an alcoholic and Mom was on drugs. Well, Dad got a grip but he took it out on the kids by remaining remote (not so now, praise God), and Mom took off down south somewhere with a bunch of drugs and a new b/f. It had been years since any of them had seen her, yet they all loved her. They all missed her.

Little brother wrote her a letter, from jail, on Mother's Day (a letter she never got). His sister cried as she read it, and so did I. "Dear Mom, I don't hold anything against you, but I wonder if my life would've been different if you had stuck around a little longer, and maybe if we hadn't all been split up. I hope you're alright. I'm not much of a praying kid, but I pray for you and Dad. And I hope if you ever find out I was in jail, you will forgive me for goofing up. I'll try harder, Mom.."

Well, you see where this letter was going: "I need for someone to care." I allowed her to receive every one of his allowed phone calls - which are made collect only - because they so needed one another. But it was too hard on her, you know? Later, he thanked me so much for not only accepting his calls, but for taking care of his sister whom he loved. "It's my brother's and my responsibility, and we blew it.. God bless you, I'm so thankful to you people."

I know that not everyone in prison or jail is him.. but we all need someone to care for us so much that we find peace and health. There are so many of daughters' male friends on the street at 18 -- we took in many over the years from our first set of kids, too. Because I know where acting-up or tipsy boys go almost right away: They go to jail, and they get a record. Sometimes, maybe often, that would NOT happen, if there were someone vitally interested in them.
Anyway, thank you for a crucially important post.

In college we studied prison/jail rehab programs as part of my degree, and they do have a high rate of success. By getting the prisoners engaged in some form of rehab, which for them is teaching them a skill or a trade, or even emphasizing their interests and finding a legitimate place for them, not only do the prisoners earn money that goes into an account for their release date, but they actually contribute to society while working off their debt of time for their crimes. No, it doesn't work for everyone, but the reason it works for manay is exactly what you pointed out; it emphasizes their dignity.

Isn't bishop Lennon the same who is formerly of the Archdiocese of Boston? Didn't he go down to Kentucky first until Msgr. Gainer was installed there?

So are you going to write the letter? I am right now really struggling to forgive someone. My "lenten mission" was to do this and I really prayed. I think I made progress but when I think about things that happened I still feel vengeful so I'm obviously not there yet. I know i have to forgive but it's really hard!!!

Yes, it is truly hard. But the benefits are in our court who do it.

I say an extra prayer for you today MJ

One of the members of Men of Praise, a prayer group that my husband belongs to, is involved with a prison recovery ministry in Cleveland. They recently received a grant to enlarge their facility from 5 rooms to 25 rooms (this could serve 75 men). They are looking for furniture and household items to get up and running. There are so many men like the one in Akron that have no support whatsoever when they get out of prison.

As an aside, you made me weep for my own lack of forgiveness and unconditional love. I pray that the Eucharist give us all the strength we need to love as Jesus did - unto death!