TUESDAY QUOTE OF THE WEEK - XV

FINDING TRUTH WHEREVER IT MAY BE FOUND: "(La Mannais became convinced that Christianity was itself true democracy; it alone recognized the equality of all souls."
QUOTE II - "It was an easy trick to turn and not for the last time, the refashioning of Christ into the modern, sophisticated prejudice's, a reduction to convenience and tacit dismissal."
The above two from Thomas Nevin's, "Therese of Lisieux."

LETS GET FIRED UP! Or not. Whatever. David Brooks writes this in last Friday's N Y Times about this trend among Catholics in America; 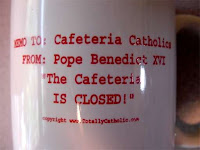 "Always try to be the least believing member of one of the most observant sects. Participate in organized religion, but be a friendly dissident inside. Ensconce yourself in traditional moral practice, but champion piecemeal modernization. Submit to the wisdom of the ages, but with one eye open."
Perhaps we could name it, "Limited Cafeterianism."

I was reading "BUtterfield 8" as a summer read. It is considered a "masterpiece of American fiction." It is not what you would call inspirational reading, but often little gems of truth can be found anywhere. Here is a little gem from "B 8";
"On the other h

and Eddie liked absolute faithfulness in a wife, not so much because his own mother practiced it, but because as a result of her practicing it she became finally a much better person in his eyes than his father. The years of being constant were a lot like years of careful saving, compared to years of being a spendthrift. It was just that it was easier to be a spendthrift than to save. Of course sometimes you save for nothing better than a bank crash, but even though you lost everything that was in the bank, you still had something around the eyes, something in the chin, that showed you had been a saver. Sometimes he would say to himself; "Yes, but your mother was pretty stupid." All right, what if she was? She had kept her promise, which was more than his father had done. . . . Maybe it all did come down to the vale of a promise. You gave your word that you would not sleep with another woman; in either case it was a promise, and if you couldn't depend on a promise then nothing was any good."
The Diocese of Cleveland E-Newsletter wants Catholic War Veterans to know about this site.

"WHERE ARE YOU GOING?" This is a day long retreat designed to help single, Catholic adults living in the Cleveland area explore and learn more about the priesthood and consecrated religious life. It will be held at the Center for Pastoral Leadership on June 16, 2007. For more information you can contact my classmate, Fr. Michael Gurnick at mgurnick@dioceseofclevealnd.org.
Posted by Fr. V at 6:31:00 AM

Email ThisBlogThis!Share to TwitterShare to FacebookShare to Pinterest
Labels: Catholic War Veterans, Quote of the Week, The New Faithful

you say.
FINDING TRUTH WHEREVER IT MAY BE FOUND: "(La Mannais became convinced that Christianity was itself true democracy; it alone recognized the equality of all souls."
I SAY!
THEN I WONDER WHY IT TREATS [MOST..] EVERYONE DIFFERENT?? a but contradictory nes't pas??
a SOUL is anything but DEMOCRATIC.
a THEOCRACY stateing such a comment would seem more like communisim rather than a democracy.
in other words it ALL looks good on paper. but in reality its anything but that ...

Actually - interesting points to ponder Sattvicwarrior. And my appologies, I think that I have habitually left a "t" out of your name.

Point to ponder - does equality mean everybody is the same? Or that everyone is respected in their particular role?

YOU SAY!!!!!!!
Point to ponder - does equality mean everybody is the same?

I SAY!!!!!
“EVERYBODY”?? THAT IMPLIES DUALITY.
[ soul[s] in transit from the body]
In infinite consciousness or god consciousness if you will, there is NO division .
everything is ONE.
GOD is one …. there is no duality.
it is without duality, and can scientifically be proven .
. the word “ everybody” is technically singular,[ as its spoken from and individualized persperspetive] and therefore would be contradictory ,and flys in the face of omnipotence and can only be applied on an intellectual basis, which is either a concept, a precept or a notion all based in the thinking principle of one group or one person, . which there is no sense of permanence , so therefore cannot incorporate such altruistic words as “ equality”. its contradictory by the mere description of it, and has nothing to do with what where the “ soul” resides or goes to as expressed .
YOU SAY
Or that everyone is respected in their particular role?
I SAY.
RESPECTED?? EVERYONE??
Physical consciousness and the thinking principle associated with it is NOT a collective consciousness but INDIVIDUALIZED.
that again [ his statement] comes across as contradictory..,,
and my understanding is the BODY is NOT responsible for the SOUL. [ to a certain degree] tis the other way around.{ ITs how we use/ abuse our postion with the body that affects the final outcome of the soul.
ananolgy here would be two flowers in a field of sunlight will NOT necessailty grow at the same rate even tho they are of the same genetics [ being one] your presentation [ or the quote from that dude you quoted] is apples and oranges so to speak. SO it s very confusing what the conclusion would be, concerning the quote , so it sounds like he is coming from two different places without realizing it but is establishing it as some form of truth .. THe result is he is
making a sweeping [ and rather dangerous] generalization as to call the collective consciousness of SOULS a democracy ......
through ones sepereate and own obsesrvation and logical conclusions makes one what to scratch his head and say…HUH?? “ how did he come up with THAT “?? .

i'm not sure i followed all that, sattvicwarrior, but i'm workin' on it - and thanks for toning down the caps - my hearing aids were on overload

and how was the baja?
(you did say a while back you were headed there, didn't you?)

if not, it must be my addled consciousness trying to think in some altered state [sheesh! i can't even make it sound like i have a clue on how to talk]

dear UNCLE JIM.
baja was GREAT.
sorry bout the CAPS thing but its how i can read tween quotes. some people for some reason find it " offensive"? i dont know why. it actually easier for me to read.
wish i coud do the italics thing. someone did that on one of my comments on my blog and they wouldnt share it. [ darn] [ control issuses on their part. .. anyway. sorry you didnt follow me line of thought. its difficult to capsulate and keep it simple and get a point across,.
i KNOW im notthe ONLY one that thinks this way.
. . the most simple things that are the most astounding are usually one finds VOLUMNS of books on. wierd huh?

anyway priest dude didnt feel it worthy for an answer i guess. . . oh well.it aint gonna change the order of the universe is it???
i REALLY was curious to see if he had input. im NOT challengeing his perspetive. just curious how he resolves and comes to conclusions. and I REALLY am intersted in his perspective. he comes off as kinda cool and genuine . .
maybe im just kiddin me self.
no big deal. . this is his space not mine.

hey there, sattvic ... i think our priest 'dude' is genuine ... and as he's been double and triple posting a lot lately, i say he's very busy and still trying to stay up on the comments we all make - so his 'no response' may be merely not going back this many posts ... or he just missed it ... or he's still chewing on it ... or he's moved on to other topics ... or ... or ...
I don't think he's decided not to respond to you ... to wit, i see he's responded to you in a later post above on another topic / issue / question
as for the CAPS thing, it is not 'offensive' to me, just it is like screaming instead of talking, and in my mind's ear i hear it loud - way loud - and i find it difficult to mentally turn it down.
and so far as italics goes, i can't figure how to do it either ... and the same with 'bold' fonts - i guess i'm not geeky enough.
and i certainly don't look at the church as being a democracy in the sense in which we use it - in the end, we each choose our own destiny - we are not victims of someone else's theocracy - we're free to accept, and then it becomes our own, or we decline, and then it remains someone else's - 'we're free'

I SAY!!!!!!.
[ please note NO CAPS}. :).
thats VERY well said. but said by a person who came to his own conclusions with internal knowledge and introspection..
you cannot say that to someone who is SPIRUTALLY marred or damaged from the " slings and arrows of outrageous fortune" such as the reality around them as its difficult enough to SURVIVE outside of them selves, let alone getting in touch with their INNER BEING. or " SELF" as opposed to " self".
in other words. it looks good on paper. but is not always a viable when push come s to shove. [ dealing with the day to day existence of putting food on the table etc. ]
there is ALWAYS a blueprint to a better way. but that's all it is. just a blueprint, it doesn't make it truth or fact. that's a personal and a very difficult path to walk and most DON’T [ regrettably ] have the time to do it!!!!!!!
thanks:)

Sorry - It is a bit swamped at this end. Wedding season (and for some reason it has become funeral season - I thought people who made it through an Ohio winter would want to live through the summer. I don't know.)

Anyway, the quote was taken somewhat out of context I realize. Perhaps there is some way in which he would agree with you (at least I think . . .) Christ calls us to that unity and that equality that doesn't create dualities and divisions and levels different levels of worth for individuals. Is that ANYTING close to what you are getting at???

YOU SAY!!!!!!!
Christ calls us to that unity and that equality that doesn't create dualities and divisions and levels different levels of worth for individuals. Is that ANYTING close to what you are getting at???
I SAY!!!!!!!
TOTALLY RIGHT ON DUDE!!!!. THATS EXACTLY WHAT I SAID!!!
you said it a little clearer.
[ i get a BIT CLINICAL , my fault] tis the power of passion for ones own convictions}.
thanks:)