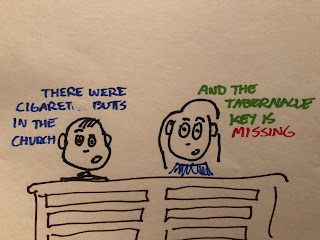 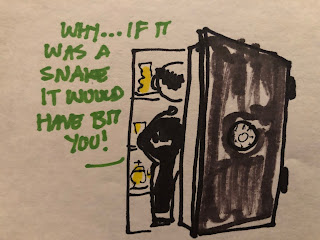 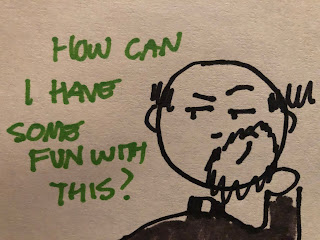 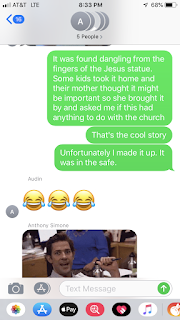 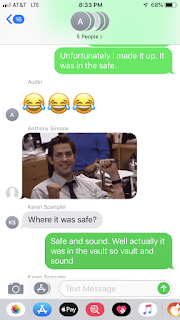 TUESDAY QUOTE OF THE WEEK CDLXVIII

FINDING TRUTH WHEREVER IT MAY BE FOUND:  "There is a cult of ignorance in the United States, and there always has been.  The strain of anti-intellectualism has been a constant thread winding its way through our political and cultural life, nurtured by the false notion that democracy means that 'my ignorance is just as good as your knowledge.'"  Isaac Asimov

It is difficult to see through the trees but the city is setting up the "BIG" stage in Elm Hill Park (AKA Forest Lodge Park) across the street from St. Sebastian.  We have been wondering where they were going to set it up - it will be over by the ball field.  Thursday and Friday night there will be the ballet and on Sunday night the Akron Symphony Orchestra will play practically in my front yard.  Awesome! 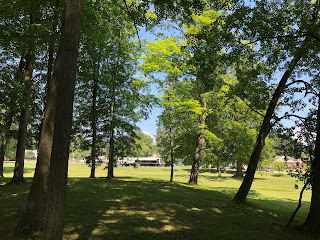 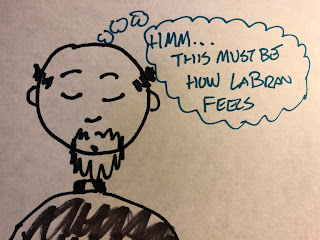 Some of you may not want to read this.  Trigger warning.

Yesterday I spent much of the day at our seminary with some other priests helping Fr. Trenta, formerly in residence at St. Sebastian and currently my cousin, get acclimated to his new digs.  It reminded me of something that happened a few years ago when I was there visiting Fr. Ott.  I needed to use his necessary room (WC) and he suggested that I use his new contraption and see what I think. This was back when the Squatty Potty was all the rage.  Only if you need to know what this is see the following video - if not, skip it.

So I tried it out and it seemed to me a waste of a portion of a perfectly good paycheck. 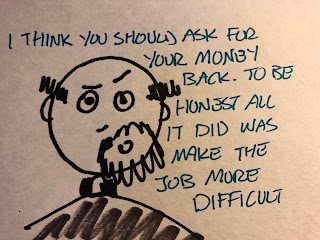 And this is why, even on the simplest of new things, one should always explain to someone who has never seen or heard of such a thing how to use it. 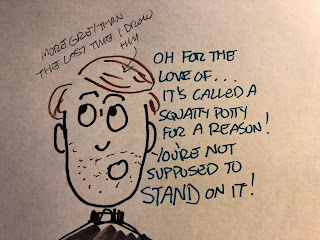 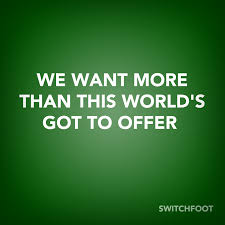 It’s a rough analogy, but that is kind of what Jesus was talking about when He said, very bluntly, “He who loves (mother, father, son, daughter . . . ) more than Me is not worthy of Me.”  (Matthew 10:37).  Very often someone will say that they find it difficult to love God more than a spouse or child as if by loving God first, their loved one is loved less.  This is not the case.  In fact, it is the opposite.

God is not a source of love.  God IS love itself.  He is the river and source of all love that flows into your life.  Although we say that there are different kinds of love, there is not.  There is only one love and it comes from God.  There are different appropriate expressions of it, but there is only one love.  If we love God first, second persons are not loved less but are loved more in keeping with their nature - they are loved better and more fully. 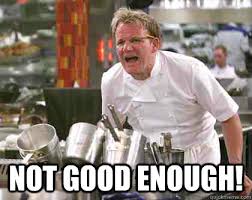 Placing all of one’s hopes of being loved, of being cared for, of being protected and appreciated on a human person is too much for any human to bear.  It is hanging a hat on a hook that cannot support the weight.  That weight is to be borne by God.  Placing it entirely on another human person leaves us extremely vulnerable to disappointment or devastation.

Building first on the love of God takes an extreme pressure off of a relationship and leaves both far less vulnerable.  It helps give them the security of being loved while not taxing each other for a sense of self worth and dignity.  That all flows from upstream, purifying the waters of love and making it far easier to tend to.

Our faith is not just about following a bunch of rules, it is about discovering how we thrive best.  As creatures we have certain conditions in which we flourish.  Loving God first is one of those ways in which human relationships grow to their potential.  Cutting God out of that process or making it secondary is placing true love on a back burner in favor of something less worthy and effective.  Unknowing, perhaps, they want less than God.
Posted by Fr. V at 6:50:00 AM 2 comments:

TUESDAY QUOTE OF THE WEEK CDLXVII

FINDING TRUTH WHEREVER IT MAY BE FOUND:  "The man who won't give up comfort for success makes a bad partner."  from Richrd Stark's, "The Jugger"

QUOTE II:  "The necessary can always be done."  same source.

Last night was Theology on the Rocks with Fr. Zerucha.  There were over 90 people who fit FAR better in this new venue.  The food was a step up from last month. 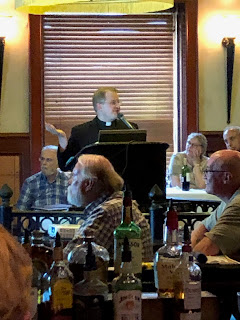 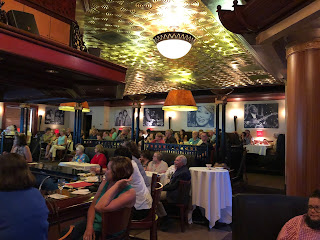 Thanks to seminarian Joe Mannerino who provided entertainment on the piano. 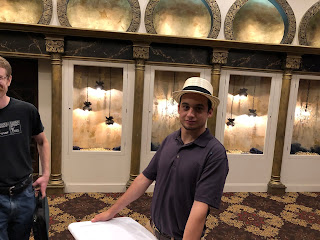 All kinds of plant improvements going on at the parish - but these make me smile a little more - a new fence in the cutting garden: 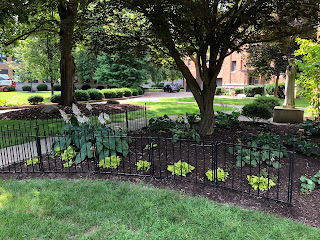 And our flagpole was painted! 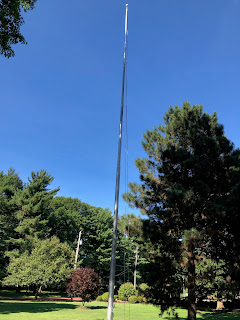 From last night's talk - Should we baptize extraterrestrials?
Posted by Fr. V at 7:22:00 AM 1 comment: 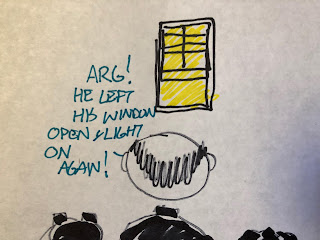 We've had a lot of over night guests at the St. Sebastian rectory as of late.  It's been a lot of fun having a full house.  It can also be a lot of work at times but it is worth it both for me and for the parish community coming in contact with so many wonderful priests and seminarians.

One of the things you give up (as anybody in any kind of relationship knows) when you invited people into your life is total control.  For example, Marcy was in the kitchen the other morning asking, "What is THIS doing in THIS drawer?"  I replied, "Yeah.  It made sense to somebody.  If you can't find that for which you are looking just keep going.  It will turn up somewhere."  Better these little triflings than to be living by myself in this big house with a fern.

So you do your best and try to fix what you can and so I headed up to the room to set things right (trying to save the parish a few bucks.) 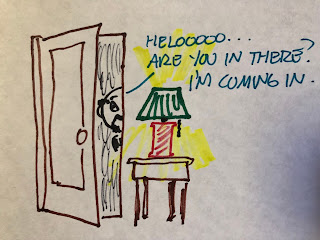 I turned off the lights, and started shutting the windows . . . 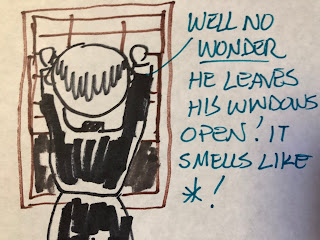 And yes it did stink in there.  Badly.  I was thinking that I may have to have a talk with the person in the morning about hygiene and communal living.  But, as it turns out, I would have had the conversation with the wrong lodger.

In another room, a good buddy of mine was taking something of a retreat.  He moved in for a few days to enjoy the rectory, con-celebrated Mass and take advantage of the quiet in the house and the good food at table.  I thank Monsignor Zwisler, the founder of the parish and the man who built this rectory, that he made it nice and provided us with a number of suites so that we could be hospitable to clergy who need a room from time to time.

Father didn't come alone however.  He brought a roommate; a chocolate lab who, by the way, turns one year old today!  Happy birthday buddy.  Anyway, he is a TRUE puppy and with enough energy that he probably makes a significant addition to global warming.  While an adorable, welcome and friendly dog, he is not quite as well trained (yet) as Sebastian and Chester.  It must be like having kids - when you don't see him and it is very quiet, you know something bad is happening.

Well, apparently he made his way into the the other lodger's room who left the light on and the windows open, climbed up on the bed and left a little (well, BIG actually) present. 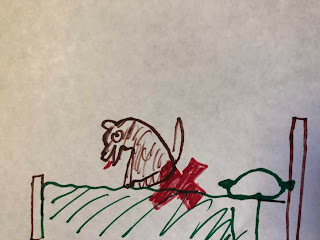 THAT was the smell that I detected when I went in to close the windows.  I almost left without noticing the offending pile but something made me look over at the last second.  I got the owner and showed him what happened and we stripped, cleaned and changed the bed.

Now mind you, it was already pretty late at night.  Going for the walk was the last thing I was going to do before hitting my mattress.  I wonder, what would have happened if the lights were not left on or the window left open?  I would not have gone in that room!  Further proof that getting upset and upsett worthy things is not always productive.  Sometimes it is God using unusual circumstances to bring attention to something that needs tending to.  What if that lodger had come in late, late, late at night (as he did) and just dove on to his bed to crash (which he did), what disaster would have taken place then? 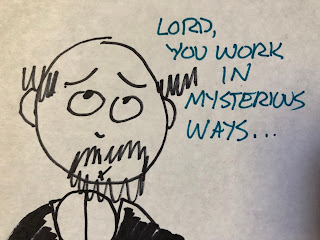