MONDAY DIARY: ALMOST EXCRUCIATINGLY TRUE STORIES: THE CASE OF THE TRAIL OF BRASSIERES 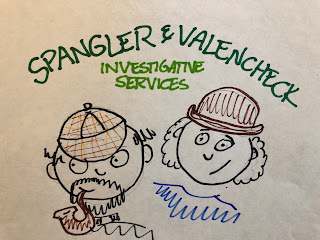 It was a damp, wintery morning in West Akron.  I was just about to start a quiet, early morning doing that for which it was intended: drinking coffee and mediating.  It was just then that the phone began to ring disturbing the peace and quiet that so rarely descended upon my rooms.  That didn't bode well.  Nobody called that early in the morning to tell you that you've won the lottery or to compliment you on your flower garden.  I picked up the call with trepidation.  But when you are in my line of work, that's what you do.
Of course there had been a crime committed. 2021 was already reminding me that crime doesn't take a holiday.  A cell phone and wallet had been lifted from the church during Mass.  It's something you learn living in this world: from time to time everybody goes to church.  Even crime.
I told the dame on the line not to worry.  Spangler and Valencheck were on the case.  If this crime could be solved, we were probably the ones who would spend Saturday morning trying to do it.
I recalled that earlier, when I was out walking my dog,Chester (named after G. K. Chesterton) we had come across a woman smoking a cigaret outside of the church during Mass, an odd time for that.  I didn't think much of it at the time and I wished her a Happy New Year.  Now it occurred to me she could be the New Year Robber.
Immediately I put word out on the street about the case.  Similar reports came in from around the neighborhood - trash cans being rummaged through, missing items.  A probable sighting came in from a neighbor up the street.  I grabbed my dog Chester and my trusty sidekick Spangler and we went investigating.
We covered the streets between the church and the supposed sighting, looking in gutters and culverts, bushes and trashcans, all the regular hiding places of things people don't want found.  It was dirty, grueling work, but when you are dealing with filth, one has to get dirty. 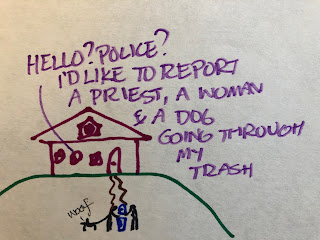 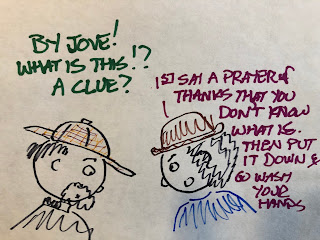 We traveled all over West Akron following the trail of brassieres.  But the trail gave out just like the elastic on those garments.  We were at a crossroads.  To go the wrong way could lead to a loss of valuable time and every investigator knows that minutes can make the difference between a solved case, and a case as cold as old pizza in the refrigerator that you keep around because it feels wrong just to throw it out.
All my instincts told me that we should go straight.  But there were dogs down that way and Chester was already growing anxious so we turned right and crossed our fingers. 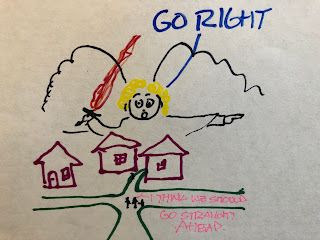 "Wouldn't it be something," I said to Spangler, "if it was our guardian angel that made sure there was a dog in our path so that we would be forced to turn right."  "Stranger things have happened," she said.
We walked on doggedly, ruthlessly toward our meeting with the unknown - heedless of the danger and the shame of going through trash cans.  Then there was glint in the road!  It was the phone!  Another half a block was an abandoned cart!  In the cart was the wallet and credit cards and driver's license - everything except the $40!
"You did it guvna!  You done solved the case!" said Spangler.
"No, my dear Mrs. Spanger, WE did it.  Solving crime is not the job of just one person.  True, I may have spotted the cart, but it took you, the dog, and all the vigilant people of West Akron to solve this case." 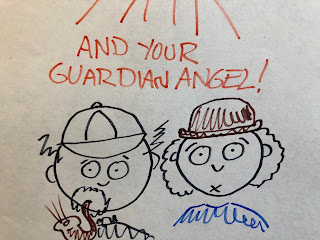