It is a busy weekend so there will be just quick meandering thoughts over the next couple of days.

This weekend is Pentecost and time to count your blessings, all fourteen of them; seven gifts and seven fruits of the Holy Spirit.

Seven is a cool number. There are seven sacraments, seven deadly sins, seven virtues, and seven joys and seven sorrows of Mary.

. Translated Jesus is asked, “Shall we forgive perfectly?” and He replies, “I mean seriously perfectly.” (Forgive us our trespasses as we forgive those who trespass against us.) This still holds even for our horrible new translation which simply states “77 times.”

The Catholic Source Book asks, “Why seven? A solar year, and a lunar month, and a twenty-four hour day are naturals, but a seven-day week is a supernatural. Seven is holy. Seven is magic. Seven days make one week. This was determined even by the author of Genesis – or God Himself – who created the world, and rested from it on the seventh day, or one ‘wee

k.’ So this seven-day cycle from the beginning was religious. The Romans’ week was also seven days, naming them as they did after the heavenly bodies of the sun, the moon, and the planets (five of which they knew). Seven . . . one weeks worth of days.”

There is (very unofficially) a seven tiered hierarchy of beatitude in heaven as in, “I am in seventh heaven!”
Traditionally when the bishop comes to visit, there should be seven candles on the altar.

There are the last seven words of Jesus, Seven sign from St. John, Scriptures record Mary speaking seven times, in Revelation Seven spirits before the throne of God, seven candlesticks, stars, trumpets and seals on the Book of Life, every seventh day is the Sabbath, after seven weeks is a jubilee day (the fiftieth day), every seventh year a sabbatical year, every seventh sabbatical year is followed by a Jubilee year (fiftieth year). 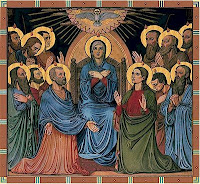 It was also the most difficult of the times tables for me to learn as a kid.


This is all either really significant or it means absolutely nothing. Either way, it is still really cool.
Posted by Fr. V at 2:31:00 PM

What are the pentecost observances again? Isn't there a novena to the holy spirit that's supposed to be done at this time. A busy weekend indeed. Memorial Day and all the stuff we plan around that plus pentecost. It's no wonder the HS is sometimes sidelined.

Well, it means plenty to me, Fr. V. Interesting.

I can't remember which Vatican II document it is(perhaps it is a post-conciliar doc), but it says something about future liturgical calendars, or modifications to the present one. Anyway, at some point the document states that never, under any circumstances, are we allowed to create a calendar that does not follow the seven-day week, even if the local culture doesn't follow one.

That is cool. If you discover where it is, please let me know.

I'm with Carol, that was really interesting. I remember you talked a little about that in your sings and symbols class.

So when is the next jubilee year?

7 indicates completion or perfection in Hebrew numerology, if I'm not mistaken.

I just thought you should have 7 comments.

Fr. V. ~ I love your meandering thoughts...for some reason, they are always so informative and entertaining.

So what do the 9 choirs of angels signify? (There's 9, right? I could go to my own Catholic Sourcebook and look this up but your "meandering thoughts" will say a lot more than the book will.)

Maybe I'll pick a day and do a symbol a week. Actually that would help with a project that I've been wanting to do anyway.

Interesting post, Father! No wonder so many people choose the number seven as their favourite number.

The seven times table was the hardest for me too.