“If you are what you should be, you will set the world on fire.” –St. Catherine of Siena

The first time I read this quote, I was amazed at how simple it was, yet at the same time, how much power it exuded. I’ve been reflecting on this quote for the last few years—in particular to my vocation.

Two summers ago I was very blessed to do some traveling. My first adventure was an experience unknown to me. I had been pondering a religious vocation for some time but was very timid to take a step forward. I had been talking to a large group of people: seminarians, priests, religious sisters, teens and adults from my youth group, and my friends that weren’t Catholic.

Speaking of a religious vocation is foreign to many people, and the thought of actually devoting one’s self to a life totally centered on God is VERY foreign and also unheard of. Many are against the thought and couldn’t understand why a young adult would trade a good paying job, a nice apartment, freedom to travel, and a chance to go to medical school for a life of humility, a habit, and complete fidelity to God, the Church, and the Pope. Don’t get me wrong, those thoughts had come to mind but what angered me was the fact that religious that I knew were trying to tell me that this wasn’t for a young adult of today. Think of all that I would be giving up: a family, children, etc, and what about my parents, I was an only child, what would they think?

Conveniently, it was at the same time the associate pastor from my parish asked if I would like to go with him and his parents to visit the Nashville Dominicans in Tennessee. A friend of his, Sr. JP, would be taking her final vows. I felt this was the opportunity to at least check out the idea of a vocation. 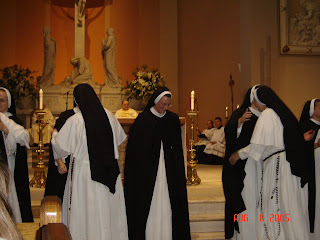 With that, the four of us traveled down to Nashville. When we arrived that evening, we attended evening prayer with the sisters, which was amazing. To hear all of them sing in unison and to be so into their prayer life, I felt like I was in a trance. The next morning we drove to the cathedral downtown, The Cathedral of the Incarnation, where we watched the sisters take their final vows. It was one of the most amazing things that I had ever seen. Words cannot explain the awe that I felt at the moment when the sisters laid prostrate on the ground silently proclaiming their live to Christ. I think one of the things that impressed me the most was that they had taken a step into a life completely unknown to most people and they did it was such faith, confidence, and humility. In their mind, they did not question what they did, rather they had embraced life to the fullest, given up everything, and thus in return received the love and happiness one-hundred times fold. And what was great was seeing four priests from the Cleveland Diocese come to Nashville to come and support sisters that they knew.

After all that excitement, I didn’t think the trip could get any better. Yet, once again I was surprised by what God had in store for me. The following morning we went back up to the motherhouse where we saw the now novices receive the habit. That was quite amazing as well as I later found out that they sew their own habits, which honestly would be quite a challenge for me. The excitement in the novices face as they were donned with something as simple with a habit, which would show to the rest of the world their commitment to our Lord. (I’m very much into the whole sister in the habit deal.) After that I got to meet the vocations director, Sr. Mary Emily, and after that Sr. JP gave us a tour of the new building and also showed us around the grounds of the motherhouse. Speaking with her one on one was one of the best parts of the trip because I got to express to her my fears and excitement about the whole process. It was great to get her insight on things and to talk about the fears that she had during the process and also what her daily life included.

Although I can’t say that I’m 100% sure that religious life was for me, I felt a bit more at ease considering the process. I often think back to that trip and keep wanting to go back to visit with the sisters and see if there is a calling. Yet, I am still hesitant to take the step forward. To further explore religious life, there are some things that I’ve been working on to discern my vocation, whatever it may be. 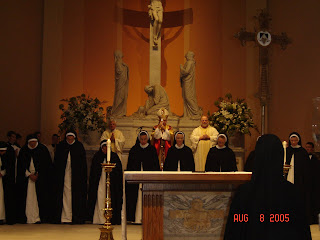 1. Get a spiritual director! It’s always better to talk through things with someone who has gone through it before. They have some additional ideas that will help you discern. Or at least talk to a priest or religious sister regularly to get their perspective on things.
2. Join a group that supports vocations. Its great to have someone your age that you can talk to and relate to.
3. Do some spiritual reading. Read books about the saints and other Catholic topics that will help with your formation to become a better Catholic.
4. Find a group of friends that support the idea of a vocation and will participate in activities with you that support religious life.
5. Live a lifestyle that would support your vocation.
6. Other websites have great links on discernment if you have the time to spend on the web so check those out.
7. Check out a “Come and See Weekend” or make a retreat where you can reflect on your life with God at the center.
8. PRAY! Not only ask for God’s guidance but also tell him your fears and excitement about the ideas of religious life.

Unless you are really lucky and you have that “sign” where God comes down from the heavens and tells you about your life as a priest or religious, you still may be uncertain. However, these things take time and with any vocation in life (religious or non) one must discern properly. Enjoy the journey of discernment because you never know where God may lead you.
Posted by Habemus Papam at 6:09:00 AM

You are in my prayers. I considered religious life but I don't think it's what I'm called to.

Shocking that religious would tell you that that life is not for young adults. Shame on them, to inflict their own crisis upon someone God may be calling.

No wonder some places have a "Vocations Crisis". The root of that crisis is in those who are rejecting it from within.

You made me so happy...those are my sisters! (I'm entering in August!)