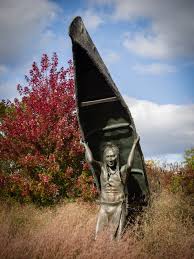 The Parish of Saint Sebastian was founded in 1928.  Until 1805 the east boundary of the parish was the western boundary of the United States.  The modern day road marking this line, Portage Path Road, roughly follows the trail Native Americans once used to portaged their canoes from the Cuyahoga to the Tuscawarus river.  Doing this allowed them to travel from the Great Lakes all the way down to the Gulf of Mexico via waterways save for this relatively short stretch of land.

The land on which the parish buildings stand were once was part of a large farm that served as the county home.  Evidence of this farm exists to this day by way of a city park located one block east of the church.  Every summer rectangles of slightly greener and quicker growing grass appear in perfect rows at one end of the park, remnants of what once served as the graveyard for residents of the county home.  The graveyard was moved when the home was moved further out into the country when the city invaded what was once nothing but farmland.  After having done some excavation to improve the flooding conditions of the park, the city declared that all of the bodies had indeed been removed.  But I don’t go walking in that park on All Hollow’s Eve at midnight just the same.  (Just kidding.)

Originally the parish was to be located about an eighth of a mile from where it now stands but anti-Catholic sentiment forced them to buy some former swamp land which, in the long run, became a much more ideal location.  God works in wondrous ways. 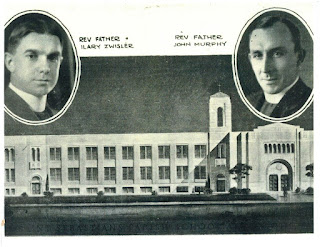 The first building to be built was a combination church, school, convent, parish offices, and social hall.  The pastor lived at the local Catholic hospital and served as chaplain there until he moved to a rented home a few blocks south of the rectory.  But in the mid-thirties that house was sold forcing Father Zwisler and his parochial Vicar, Father John Murphy to find another house to rent.  It was at this point that the pastor decided that it was time to build a parish rectory.

Fishing around in the parish archives, I came across some old newspapers that the parish published in 1936 concerning the campaign to build a rectory.  The masthead of the “The Local Motive” was a head on picture of a locomotive charging toward the reader and written on it it declared that the parish wanted to raise $30,000 to help erase debt and $30,000 to build the rectory.  “Give it right away!” it urged. 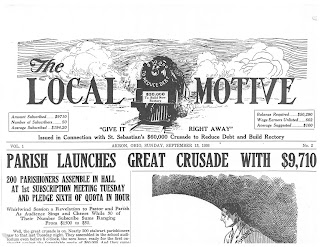 From reading the various articles, it sounds as though the project was not without controversy.  The great depression was still on, the bank that held the parish’s saving had just failed and this was no small amount of money.  According to the Bureau of Labor Statistics consumer price index, $100 in 1936 equaled about $1,813 in purchasing power in 2018.  Today it would be the equivalent of raising well over a million dollars.  But it was successful and soon the rectory was constructed.

There is surprisingly little known about how the rectory originally looked interiorly.  There are no pictures of the furniture, window treatments, or wall colors.  Apparently the floors were covered in brown linoleum which still exists in some closets and under the carpeting.  The only picture of the original interior of the house of which I am aware is of two couples who were married in the pastor’s office before the young grooms were sent off to World War II.  In the upper right hand corner you can just about make out the end of a curtain rod, remarkably similar to ones found in the living room but that were only installed recently, and a bit of a curtain with flowers on it.  Not much else is known. 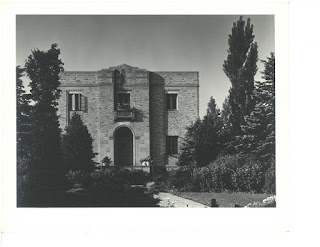 Despite the size of the parish and the house, it was only built with three offices; the large one for the pastor which also contains a vault, and two smaller offices, one for the secretary and one for all other priests to share.  This was not all that uncommon.  Unlike modern parishes, there were no business managers, bookkeepers, youth directors, directors of religious education, marketing directors, development directors, let alone computers, copy machines, FAXes, and a host of other large electronic equipment we cannot live without today.  Parishes were not expected to do as much, priest’s roles were a bit more limited, and so the construction of a hallway of offices would have seemed an extravagant waist.  Those three offices still function as the main offices of the parish though their use as changed.
Posted by Fr. V at 6:51:00 AM

I'm thoroughly fascinated learning all this! Great writing, too.