TUESDAY QUOTE OF THE WEEK CDXXXXIV

FINDING TRUTH WHEREVER IT MAY BE FOUND:  "'Sure there's a hell . . . It is the drab desert where the sun sheds neither warmth or light and Habit force-feeds senile Desire.  It is the place where mortal Want dwells with immortal Necessity, and the night becomes hideous with the groans of the one and the ecstatic shrieks of the other.  Yes, there is a hell, my boy, and you do to have to dig for it . . .'"  from  Jim Thomson's "Savage Night"


QUOTE II:  "Man is forced to give up so much of his dignity by the mere exigencies of existence."  same source. 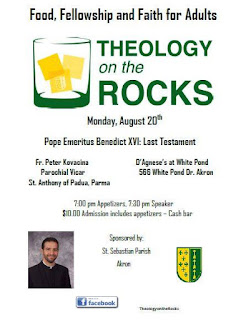 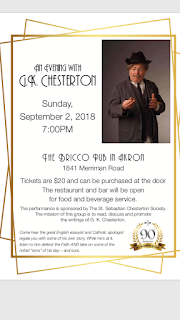 Also, this Saturday morning following the 8AM Mass (so approximately from 8:30 to 9:25 when confessions begin) there will be a symbolism and architecture tour of St. Sebastian.  We will have A LOT to get in so it will be a whirlwind tour!  Meet in the new piazza and hold on to your hat.

At some point, for some reason, I started hanging on to my Monday Diary drawings.  They are really stacking up!  They should be worth something someday in tonnage of recycling. 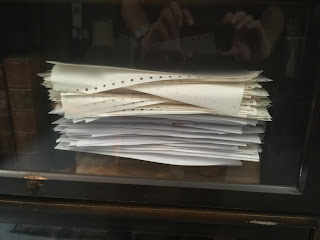 The Cannon Matthew Weaver, newly ordained, had a Mass of Thanksgiving at St. Sebastian this past Sunday. 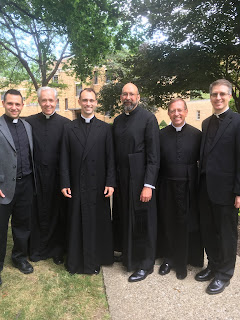 Well, Father, since you mentioned it - why don't you organize your Monday Diary drawings into a book? You may or may not realize that many of us really look forward to your Monday blog offering because we get a good, wholesome laugh from you!

A few years back, Fr. K from St. V put out a book of his musings on Vinnie, which he had archived from his bulletin articles to his parish. For those of us around Akron who know him and the late Vinnie, and later, Minnie, it gave us something to enjoy and to share with others. And his successor, Fr. N from St. V, also put out a very uplifting book a few years back.

Not only are your Monday drawings and stories amusing, but they are family-friendly and are something encouraging for us in the laity to hold onto. Not to complain, but right now things are pretty grim with us in the laity, and we aren't hearing a lot from leadership to reassure us. It is comforting to know we still have faithful, good, and holy priests in our midst, who can laugh at themselves and who care about us - and I most certainly include you, Fr. S, and my own beloved parochial vicar/administrator, Fr. B from St. B & St. M in that category.

God bless you and everyone at St. Sebastian - Sue, OFS from St. Bernard

It is rather providential that you included the item about "Death with Dignity" on the feast day of St. Maximilian Kolbe (August 14), who is the patron of all Secular Franciscans in the Northern Ohio Regional fraternity.

As you and your readers may already know, St. Maximilian accepted the twin crowns of purity and martyrdom from Our Lady as a child. He spent his adult life as a Franciscan friar in Poland, attracting many men to his monastery because of his faithfulness to the Church and his love of Our Lady. He eventually built a media empire of sorts from very modest means. He published a newspaper dedicated to The Immaculata (Our Lady), which was distributed worldwide.

For this, he attracted the attention of the Nazis, who arrested him in 1941 when he refused to stop publishing and promoting the truth of Catholicism. He was sent to Auschwitz, and endured dreadful conditions along with the other prisoners.

One day, a young Polish Catholic husband and father was selected by the Nazis to be put in a starvation bunker in retaliation for an escape attempt by another prisoner. St. Maximilian immediately stepped up and offered to take his place. The Nazis accepted this, and put him in a dark, airless cell along with several other men. While enduring starvation and desolation for nearly two weeks, St. Maximilian encouraged his fellow prisoners with prayer, singing, and hope in Jesus.

At the end of two weeks, Maximilian was the only survivor. Tired of waiting for him to die, his Nazi guards injected him with poison and killed him.

St. Maximilian is truly a saint for the times we find ourselves. Please, everyone, pray to him to intercede for us in life issues and for faithfulness in our despairing Church.

Father, I apologize for monopolizing your blog today, but this item really spoke to my heart.