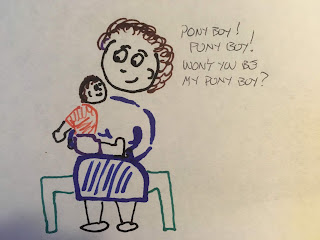 I don't get it either.

Anyway, the bouncing would get more and more intense until the final. "WHOA!" which would be a big buck of course and I would laugh and say, "Do it again!"

I kinda do the same thing with my dog Sebastian.  (Well, I don't sit him on my knee of course.)  But on Fridays one of his favorite people in the world comes to work in the front office.  Every week without fail she brings him a treat and toy.  We've nicknamed Friday, "Girlfriend Day!"  And we must be very careful not to mention those words at any time other than Friday morning or Sebastian, expecting one of his favorite people to arrive, will sit at the back door, tail wagging for HOURS.  (It is so heartbreaking.  How do you explain to a dog that they misunderstood without just building their hope up higher?)

Anyway, on Friday morning I DO build the anticipation with him.  When we get to the top of our block (and there is nobody in sight) I will bend down to his level, unleash him and ask him . . . 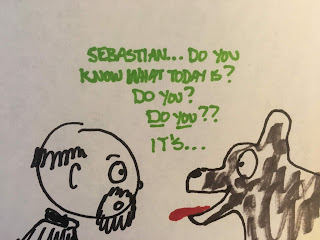 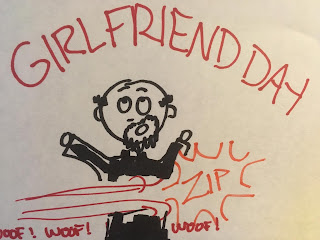 He goes tearing off directly for the door of the rectory.  I don't think an overturned meat truck would distract him from his rendezvous.  I follow behind, eventually unlocking the door at which he is desperately barking and letting him into the rectory and singing my heart out:

Which is all innocent and fun until I realized this past week there was a houseful of visitors a witness to me singing about girlfriend day. 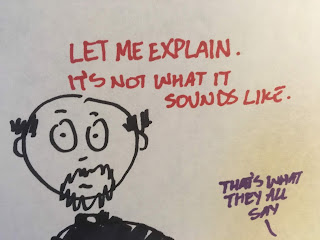 I am so jealous, I thought I was his favorite:(

This made me cackle out loud!

Hahaha, this is great. Father, is Wednesday the Feast of the Assumption a holy day of obligation? I thought it usually was but did not hear it mentioned at mass or see it in the bulletin.

August 15 is a Holy Day of Obligation. 7pm Vigil Mass on the 14th, 9:00am and 7:00pm Masses on the 15th are being offered at St. Sebastian. Also, 5:15pm in the extraordinary form ("Latin"). The Diocese also publishes a handy liturgical calendar available here if you have similar questions on future occasions: http://www.dioceseofcleveland.org/worship/

Father, here's the thing. Sebastian is a Ladies Man. So is Chester. Both will happily drool and wag over *all* women. I have witnessed it. I must break it to you. In your celebate household, you have two men who are crazy about every women they encounter. They *adore* women. They are lost causes. If they were human, they would be saying, "What a lovely dress you are wearing today, Mrs. Cleaver!" in their best Eddie Haskell imitation. We are all onto them and know they are after treats and affection. And I and the rest of the women love them!

It is very catchy!

Thanks Cindy. Far across the PLAIN. That makes MUCH more sense. How did my mother get SEA in there? Maybe she had different dreams. I think she kinda had it with cowboys. Dad loved westerns and Mom got so tired of them she would occasionally make mention that she recognized the cattle.

Dear Anon. I fear that you might be right! HA!