WHY DO BAD THINGS HAPPEN TO GOOD PEOPLE? 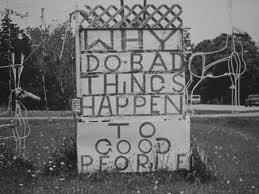 Then why must bad things happen to good people?  We will never understand fully nor completely satisfactorily in this life with this is so.  But we can begin to scratch the surface.  For example, yesterday we asked the question why did God allow the 9/11 accident to occur.  One clear reason is because of that pesky blessing and burden:  Free Will.

But why must innocent people suffer?  Why not keep the pain amongst those who want to play with fire?  Why must I lose my house because you fool around with matches?  It is because there must be consequences to one’s actions.  If I could perform a truly evil act and nobody would effected by it, would it be evil?  If there were never any consequences, what need would there be to punish people who choose ill? 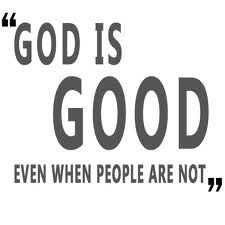 Part of the problem is, of course, that often when we punish we want to cause harm back to the person who did evil, not correct him.  But let us suppose we have always the best of intentions and when someone errs, we would want to help set them on the right path.  If there were no negative consequences to our actions, how would we rate someone as sinful?  God’s laws would then simply amount to a chosen set of limited actions rather than the highest, healthiest, and most fruitful fashion of living.
Without suffering, there could be no sacrifice – no great offering of love.  With no effects from evil actions, Jesus could not have suffered and died for us as the innocent Victim for our sins, for nothing evil could happen in this life to the innocent.  In anger I could throw my Mother’s crystal glass into the fireplace and because she is innocent and would suffer most from the incident, it would not break.  If I knew it would not break, would there be sin since nobody would suffer?  If there could not be sin, would there be the possibility that I might grow in peace?  If there were not sin would it be possible for me to reject sin and so love?  Would there be love? 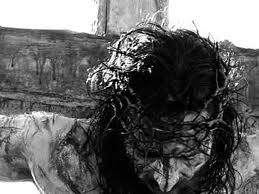 This world is imperfect and needs the innocent Victim to die because we live in a fallen but redeemable world where the innocent suffer.  But if they did not suffer, no one could choose the good, nobody could sacrifice, nobody would need God, and we would all suffer for that even more greatly.
Posted by Fr. V at 7:50:00 AM

"There is no one good but God."

Yes...life happens. And we are sinners and others do unto us out of their sin, and the world is fallen, also.

We don't stand a chance without our Lord., And even then, we;ll have to endure this world.

But He has prepared a place for us where all this 'bad stuff' is not allowed.