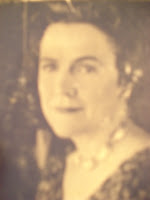 Mrs. Fenner turns her eye next to the topic of ordination.  It is not as easy a beast to tackle as you might imagine.  The standard of yesteryear has evolved into a variety of options.  Often these options are not chosen by the man being ordained but by the circumstances in which he might find himself.
For example, in the Diocese of Cleveland back when Monsignor Manners was ordained, the events surrounding the ordination weekend might make presidential inaugural festivities in minor countries look like a five-year-old’s birthday party.  Because of policy changes in the diocese, men and their families may not even begin planning such affairs until just several months before the ordination date (which means no reserving of halls and bands and caterers and so forth.)  Mrs. Fenner eschews both of these as overly lavish. 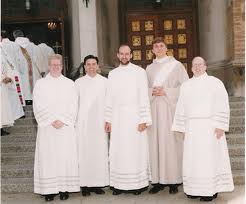 Monsignor Manners remembers his ordination weekend.  There was a dinner at Slovene Center following ordination at which my Uncle’s band played.  The next day was the First Mass of Thanksgiving followed by another dinner at the parish.  This was capped off by benediction.  Then we went to Slovenia to my grandparent’s home village and started all over again with Mass and dinners and bands.
Mrs. Fenner, while acknowledging that such events even take place is a more recent convention, suggests having a simple reception in the home, though she recognizes that formal luncheons at “the club” is appropriate. 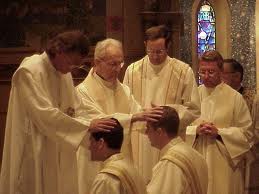 Of course, the larger the affair, the more complicated (and expensive) it becomes.  Monsignor’s Mother, who received mentoring from other moms who went through the process before her, spent the next few years passing on her experience to other mothers.  There was compiled a six page check to do list that covered duties that started a year and half in advance to the end of the signing of the last Thank You note.
Starting with the priest to be and his family, before planning anything there are some things that you need to find out.  Most importantly, what is the policy of the bishop?  This will dictate much.  The second question is what does the home pastor have in mind?  Often a parish will throw some sort of reception following the First Mass for the parish.  It is not unheard of that two or more of those being ordained will join forces and have one reception following ordination.  What are the resources available for such an event? 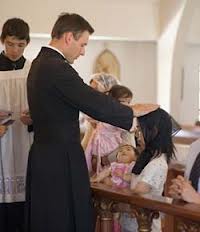 Finally, what does the man himself desire?  To you I say: This is not about you.  To do nothing is unfair to those who want to express their joy on this important event.  It is creating a poverty in the Church that could be put to such good use.  There is no “eloping” into the diocesan priesthood.  You are a public figure now and it is your duty, however simple it might be, to graciously provide for and welcome well wishers.
Conversely this is not about creating the perfect day for you.  This is a celebration for the Church.  The more you focus on providing a pleasant experience for others rather than the ultimate day for you, the more others will enjoy it, the more relaxed you will be when things do not go exactly as you with them, and the greater benefit to the cause of the Church which is what we are really celebrating.

was that Frankie Spetich's band? or was it Frank Yankovic's band? Please tell me.

It was the Frankie Spetich Orchestra!

How do you know him?