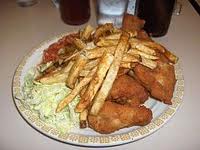 Finishing up First Holy Communion is the afterglow party.  Strictly speaking there is no grand tradition of a First Communion party though they are common enough.  Often a parish will throw a little gathering, usually punch and cookies, after the event.  More often there is a gathering of family, godparents, and perhaps a few friends of the family.  As Mrs. Fenner writes, “There is no social obligation to do this, but it is a nice thing to do for the child’s sake.”  Of course she also writes, “If Grandpa wants to give a dinner at his club, this would be a fine treat too.”  In Monsignor Manners case, Grandpa’s club would have been Slovene Center and some nice, greasy, Barberton chicken and then a game of bowling.  Now that I think of it, that doesn’t sound so bad.
In any event, we did not do this.  Wait.  Yes we did.  We all went out for Barberton chicken dinners afterwards.  We did not, however, go bowling. 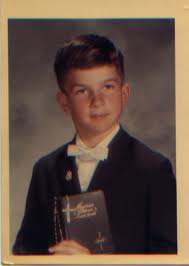 Nobody is socially obligated to give a child a First Communion gift though some people often do especially parents and godparents.  Some suggestions by Mrs. Fenner include: a rosary, a prayer book (Mass book), cross and chain, religious medal, holy water font for the bedroom, book of Bible stories or lives of the saints, crucifix, or statue of Mary, Joseph, or the child’s name saint.
In the picture from last week, you can see the rosary, prayer book, and brown scapular that we all received.  I only recently lost the rosary.  Never, never, never hang your rosary on a door knob even temporarily.  Closing the door the rosary swung out and was crushed – shattering some of the beads and the crucifix.  I also had scapular medal that was given to me.  The chain eventually became too small to fit around my swelling head and in later years I hung it on rear view mirror as a reminder.  It was stolen along with $1.35 in change that was in the ashtray.  *sigh*
This Monday begins our sacramental prep for our Confirmation program here at St. Sebastian and Friday Potpourri will turn its attention to that sacrament.

I knew you were a bow tie man at heart.