TUESDAY QUOTE OF THE WEEK CCLXXII 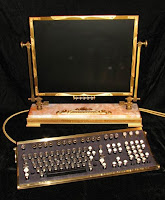 FINDING TRUTH WHEREVER IT MAY BE FOUND:  "Man's own creation has got beyond his control and are now developing their own momentum.  A secondary system of nature and fate has emerged."  Boff

You may recall the mention of the Steampunk movement yesterday.  CK suggested that we do a search of Steampunk computers of which the above is one example.  You do not understand.  I NEED one of these.  Here is where you can see more. 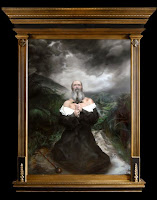 This was sent in recently about an artist I have told you about in the past:  "The National Museum of Catholic Art & Library is currently hosting with the US Embassy of the Holy See in Rome an art exhibition called “Saints and Angels” to commemorate the “Canonization of 7 New Saints” and will be celebrated by Pope Benedict XVI on October 21, 2012. Eric's painting will first be viewed at a Black Tie Gala at the Italian Embassy on September 26th, 2012 hosted by the Board of Trustees of the National Museum of Catholic Art and Library (NMCAL) and the Ambassador of Italy to the United States and Mrs. Claudio Bisogniero. During the evening The NMCAL Lifetime Achievement Award will be presented to Donald Cardinal Wuerl, Archbishop of Washington, for his outstanding service to the Catholic community. Following the gala, Eric's painting will travel to Rome for exhibition during the Canonization of Fr. Jacques Berthieu on October 21."  Read more here.
EF sent this in:  "This is cool. Subscribe to this free service and they will send a short portion of the Catechism of the Catholic Church each day in your email. Offered for the Year of Faith by Flocknote."  Go to the site here.
This sent in:  "I'm Amanda from Imagine Sisters, a new online vocation website for women! The site and the beauty of nuns are going all over the internet (fast) and we're looking for help with sharing an exiting new project we're started: The One Rose Invitation."  Here is thier site and a short video explaining this very cool project they invite you to consider.  It might make all the difference.

here is a local "steampunk" artist--bet she could help you :)

Did you know that Chesterton is often cited as a Steampunk influence, especially "The Man Who Was Thursday".

Christina Cox is not what she seems. Many ties to the mob and teamsters--the late Eddie Malloy was her lover of many years. Previous museum in NYC filed chapter 7 because of fraud by CC--she used the charity accounts as her own. Google Village Voice articles on her