FRIDAY POTPOURRI: THE WAY TO DO IT RIGHT: FIRST COMMUNION

Everyone knows exactly how First Communion should be done.  It is as obvious as the nose on your face: that is, if you are a fly looking through an eye constructed with as many lenses as a soccer ball has pieces of leather giving you the appearance of having 20 such noses. 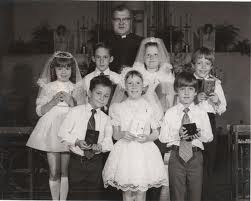 People can become rather passionate about how things should be done.  At one parish at which I was assigned there were such strong opinions that we had several different First Communions (there were enough children to warrant it) so one might choose from “Class Communion” to “Family Style Communion” to “Individual Communion.”  All of them have very good reasons behind them.  (I'm in the picture to the right.)

At Mass, we are not mother, father, child, uncle, aunt, etc.  This is why one is called upon to give the sign of peace to only one person.  In shaking hands with one person one has symbolically shaken hands with all.  If you start shaking hands with everyone around you and shooting the victory sign to others across the aisle, it becomes a literal act.  So Class Communions make sense because these are individual people setting off on their next level of initiation into the Church.
On the other hand, going with the family may make a symbolic and practical example for the child.  “See?  We all do this together.” 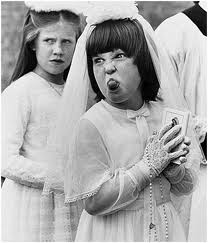 And finally, just showing up one Sunday and having a First Communion may train the child on how to do things for the rest of his life.
Of course, only one of these is the best.  But only God and a few angels knows which one for sure.  So please consider giving your DRE or second grade teacher or pastor some understanding if it is not being done exactly the way you desire it.  The focus is on receiving the Eucharist.  Everything else – everything else – is secondary.  As the inimitable Mrs. Fenner reminds us, “the child’s attitude will be formed by those of their elders.”
What should a child wear to a First Communion?  Most parish/schools have their own tradition.  It would be wise to inquire what it might be at your place.  However, the most common dress in our country today would be, for the boys, dark pants and tie with white collared shirt, and a white dress with veil for girls.  Once again, taking our cue from Mrs. Fenner, “Whether you can choose a costly costume or an inexpensive one, it is always good taste to keep it simple.  This applies to the accessories also.”  (This is very different from her advice for clothing at baptism.)

To me, the girls costume makes sense.  Not so much the boys.  The Church is the bride of Christ and Jesus the bridegroom.  It makes sense that girls being introduced to Jesus in this most intimate way should be dressed in white and a veil.  But what of the boys?  Well, they are just to look smart.  They fail the symbolic test.  But get over it, now tuck in your shirt tail and straighten your tie. 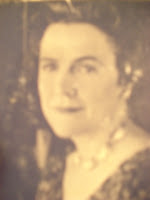 This last part we quote directly from the book:  “In Spain and in other Catholic countries, well-to-do families have a charming custom which might well be adopted by families of mean in our own land.  (When I first read this I thought, ‘uh oh.  What?’)  A wealthy family will dress its own child in an inexpensive costume and will completely dress a poor child in the same First Communion class anonymously.  (Good luck with that.)
“Consult the Sister in charge of First Communion (Ha!  Times have changed) and find out if any children in it are underprivileged (are we still allowed to use that term?) and arrange with her to make a secret gift of a sum of money – enough say, to buy a pair of shoes – for one or several of these children.  Do not let the recipients or any one save for Sister (or the pastoral minister) who made the gift. 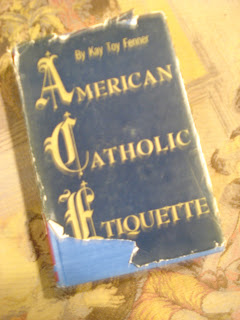 “Tell your child what you have done (I don’t recommend this) in her name (why ‘her?’ – I suppose a boy generally does not care if he has a less expensive tie on) and that the money was saved by buying her a simple costume, so that she may learn young that true charity, which is Christian love, is both a privilege and a personal sacrifice.  If you feel, however, your child is too young to keep such a matter secret, do not tell her about it until she is old enough to understand it.”

the guy in the picture does not look like a Valencheck

I beg your pardon . . . Father Valencheck is one of the little guys

That First Communicant in the back row on the left looks like he might make a fine priest one day.