FRIDAY POTPOURRI: HISTORY OF THE RECTORY: IT'S A DOG'S LIFE (END OF CHAPTER 3) 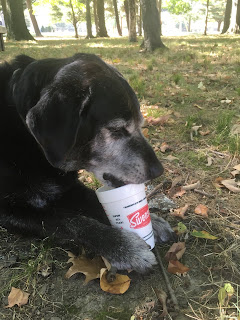 The next cause for concern was (the dog's) name.  Upon hearing the name “Roomie” people’s first reaction was always first, “Oh . . .” followed by as polite an, “Eww,” as they could muster.  First impressions of the name always turned to rheumatoid arthritis or rheumy eyes.   Explaining the name helped.  The dog was thought to be a companion for a person who was somewhat bedridden and he had named him Roomie as in, “This is my roommate – Roomie.”  But explaining this became old quickly and it did not mitigate the problem that still nobody liked the name.  But what name did fit him?  Days were spent thinking about it.  This led me to believe that I would not make a fit dad.  My child would be 15 before I came up with a name; the quick finding of names of things not coming naturally to me.

Our mother parish, St. Vincent, right next door and the oldest parish in the city, came to the rescue.  The pastor there had a dog, who regularly “wrote” an article in the parish bulletin.  He was named Vinnie after the patron saint of the parish.  With the precedent set, Roomie, the dog of the newest parish within the city limits, would now be named Sebastian. 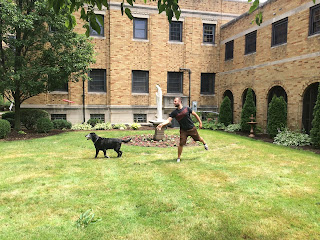 I will be the first to admit that Sebastian is an awfully pretentious name for a dog and a nickname was eagerly sought.  One day, shortly after his christening with his new name, a delivery man came to the door and took obvious delight in the dog.  “What is his name?”  he asked petting him on the head.  Upon being informed that it was Sebastian he exclaimed, “Why that was me Pa’s name!”  Quite intrigued we eagerly asked if his father was ever given any kind of nickname.  “Sure he was,” said the delivery man.  Excited to find out what Sebastian’s new nickname might be he was asked what his father was called.  “Busty!” was the proud answer. 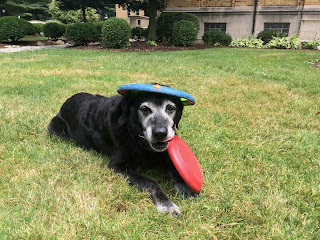 How they got “Busty” out of “Sebastian” is beyond me.  In any event, Sebastian was not going to be called “Busty.”  It seems inappropriate for a rectory dog of expected high morals.  So for the most part he remains Sebastian though there are a few other nicknames to which he will readily answer: Poops, Sea Bass (my least favorite), Bosco (I don’t know why) Seraphim (long story) and a host of other names – but mostly he is just Sebastian. 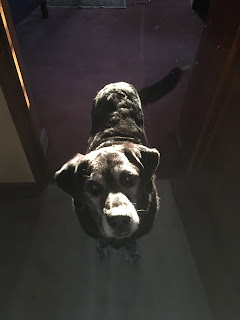 Now after everyone went home at night there was something living in the house that could tell me if I should be concerned about a noise, that would alert me if I should miss the doorbell, and could divine which of the doors it was that needed answering without me running to the four corners of the house.  It was a joy having a house mate.

I needn’t have worried about being alone however.  A little patience would have revealed that the rectory was destined to be full of residents.  And they were all welcome.  As long as they liked dogs.
Posted by Fr. V at 6:25:00 AM

Sebastian *is* a joy, and a fine dog of high morals. He is doing his best to teach Chester these things, who is improving all the time.

I am glad you gave Sebastian a much more fitting name. It is just right for him, as is Chester's name. They are such good boys.

You mentioned something, when you were deciding about how to rename Sebastian, about what kind of father cannot come up with a proper name for his child. I was reminded of a priest on EWTN who said that if a priest cannot imagine himself as a good father and husband, he has no business being a priest, because his parishioners depend on him much as a family depends on a biological father. I think this makes a lot of sense. And I think most priests I know, with few exceptions, would make very good fathers - including you, Fr. S, and Fr. T.

Thank you for the lovely stories about the boys and St. Sebastian!