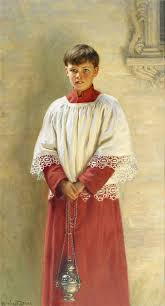 When I was a kid and somebody did something wrong enough to be reported on in the newspaper, it was not unusual for the reporter to mention that the man was once an altar boy - as if that had anything to do with the price of cheese.  People raised a big stink about making this connection and such mentionings stopped cold.  But it was an interesting back handed compliment - as if a former altar boy should know better - that a Catholic should BE better.

The thing is - there is some truth to that, but not as much as would be preferable (hence confession lines - and sometimes lack of them.)  Every once in a while someone will lob the (accusation?  back handed compliment?) that a Catholic or a Catholic organization should know better, be better, act better, lead better . . .   And that is true.  That is why we are here.  To make humanity . . . well . . . better.  Good.  Redeemed.  Saved.  Living in truth. 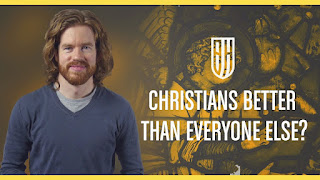 And the Church is holy - that is her teachings, her way of life, what she promotes and what she eschews is holy.  She makes saints.  But she is made up of a bunch of sinners striving to be saints (hopefully).  AA helps people not drink, but many of her people do though they know better and want to be sober.  Hospitals are about making people healthy but all of her residents are sick.  Libraries are supposed to help a person grow in knowledge and truth but some of her books are full of misguided advice, knowledge or insights.

So when someone says, “this Catholic (person/institution) should be morally better at (whatever), they are right.  But if it is perfection for which they are looking, look at the teachings of the Church, not her people.  The people are patients in the hospital.  1.2 billion people.  Priests are somebody’s baby brother - nuns are someone’s daughter, an altar server is a teen like any teen, the person in the pew is person like any other striving to be that better Christian. 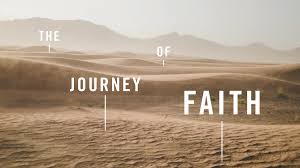 What makes them different is being soaked in the teachings of One Who knows how human beings can thrive.  They absorb grace through the practice of the sacraments and prayer.  They are encouraged regularly to good works and self improvement.  They are given a vision of a better world.  And yes we should know better.  And I am glad people think that Catholics should be held to a higher standard.  And we should hold ourselves to a higher standard.  But that even John Paul II is a saint does not mean he did everything well.  It means he strove well and still made mistakes and still needed the sacrament of confession.

This is not an excuse.  It’s a reality check.  Catholics are sojourners in desperate need of Christ.  Every day we get better, but we are definitely on the journey.  We have not arrived.
Posted by Fr. V at 7:22:00 AM

Thank you for the timely reminder, Father. We lay, faithful Catholics (and, I suspect, faithful clergy) feel a bit beaten up, humiliated, and useless right now. I don't mean to sound self-pitying. It's just been a long, horrifying summer and fall.

As a very good priest and confessor once told me, sometimes we just have to step back and get out of God's way. And to always make ourselves ready and available to be used by God. Nothing He touches fails to have some good come of it, even what is unfolding now.

And, as St. Teresa of Calcutta said, "God does not expect success. He expects us to be faithful and to keep trying." I think that is very good advice as well.

God bless us all, and our poor, brokenhearted Church. - Susan, OFS

Thanks Fr V., I have no words, just consider this a checkmark on the "Like" button