TUESDAY QUOTE OF THE WEEK CCLXXV 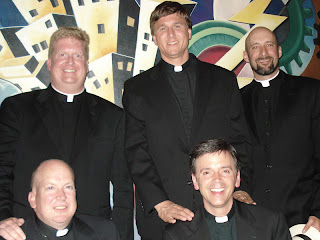 FINDING TRUTH WHEREVER IT MAY BE FOUND:  "Had angels been your priests, my brethren, they could not have sympathized with you, have had compassion on you, felt tenderly for you, and made allowances for you, as we can; they could not have been your patterns and guides, and have led you on from your old selves into a new life. as they can who come from the midst of you."  from Blessed John Cardinal Newman's "Men, Not Angels"
QUOTE II:  "A central finding of this study is the extraordinarily high rates of priestly happiness and satisfaction.  The finding are strong, replicable and consistent: priests, as a group, are very happy men.  They like priesthood.  They are committed to it.  They find much satisfaction in their lives and ministries.  In fact the satisfaction rates of priests are among the highest of any way of life or vocation in the United States."  from Stephan Rossetti's book, "Why Priests Are Happy"
IN OTHER NEWS:
"The Restless Heart" a film about Saint Augustin (the trailer can be seen on last week's Quote Tuesday) is showing in Massilon tonight at the Lincoln Theater at 7PM.

Below is a picture of a Zimbelstern.  It is a new feature on our new pipe organ.  We didn't think we were going to have one but somehow it mysteriously showed up.  But I'm not complaining.  It is really wonderful though limited in use.  To learn more than you every wanted to know about Zimbelsterns, GO HERE.  About a minute and thirty seconds into this mp3 you will hear one. 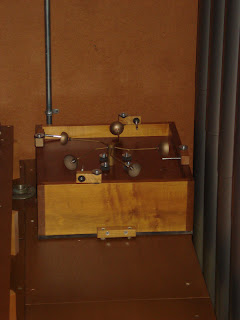 Fr. E sent this in:  10 ways to celebrate the Year of Faith.  Thanks.
This was so popular that I thought I would run it again.  From Lori, "If you go to this link you can sign up for a small, readable portion of the Catechism to be delivered into your email daily.  The deliveries began yesterday and will continue for 1 year, at which time you will have read the WHOLE CATECHISM! :)  So sign up now!"  Thank you for sending it in again.
The Diocese of Cleveland Enewsletter asks, "Did you know, the Diocese Cleveland has created a special "Year of Faith" web page?"  See it here.
There are some interesting developments from the Chesterton Society that you can read and listen about here.  You may also learn more about (and join!) the Saint Sebastian Chesterton Society by clicking on his picture to the right of your screen.
Frank sent this in.  How could anything SO VERY UNCHRISTIAN also be so very funny?


Is that what Jesus would have done?

Eric sent this in.  It is at least interesting to contemplate.  Thanks.

Email ThisBlogThis!Share to TwitterShare to FacebookShare to Pinterest
Labels: quote, Quote of the Week, videos

Father Bline is a gracious person. Thank you, Father Bline, for a delightful reception.

OK, Fr. V., the odds against what just happened being sheer coincidence are astronomical. I don't think I ever heard of Fibonacci numbers before, but I ran into this concept twice today.

Just this afternoon, we watched a fascinating presentation from the Institute of Catholic Culture by nationally respected Catholic architectural historian, Dr. Denis McNamara called "The Nature of Beauty and the Catholic Tradition: Beauty and Sacred Architecture". As I viewed it, I thought to myself, "I bet Fr. Valencheck would like this. I'll have to tell him about it sometime."

Then while procrastinating cooking dinner, I checked out your blog and viewed the video on the Fibonacci numbers. In his presentation, Dr. McNamara refers to this numerical relationship as the "Divine Proportion". He talks about the presence of these proportions in nature, but then goes onto to talk about the value of the use of these proportions to create beauty in architecture and art. This part of the presentation can be found in the video labeled "Part Two" at 27:30 in a section he calls "Natural Theology" or starting at slide 11 in PowerPoint #3.

Coincidence? I can't begin to imagine why the Holy Spirit would orchestrate me running across this concept twice within a couple of hours. In any case, I won't forget the Golden Ratio for some time.