BETRAYED BY THE SPIRIT 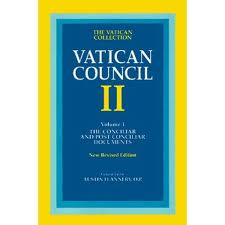 A friend of mine is having a book study on Vatican II.  Once, when they were done, they went out to eat.  He happened to place his Flannery VATICAN COUNCIL II documents book down on the table as they ate.  A man passed by and saw the book, identified himself as a member of a local break away congregation, stubbed his finger on the book and suggested that if they truly wanted to live Vatican II, they should come join them who are truly living the spirit of Vatican II.

My friend asked, “How could you possibly be living anything connected to Vatican II when one of the primary documents of the council was a call to unity particularly around our pope and bishops?”
“That’s not in there!” the man replied.
“It most certainly is.  I suggest you read the documents as we are.” 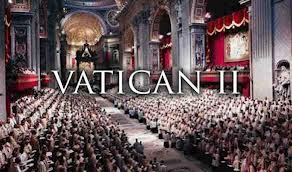 Just for the record, it is in fact in the documents.  In fact, it is in the Dogmatic Constitution on the Church Lumen Gentium.  Here are just a couple of examples where such a thing is stated:
Chapter 5: “Hence the universal Church is seen to be ‘a people brought into unity from the unity of the Father, the Son and the Holy Spirit.’”
Chapter 38: “Like all Christians, the laity should promptly accept in Christian obedience what is decided by the pastors who as teachers and rulers of the Church represent Christ.”

Even from this poverty of example, it would be difficult to sight the spirit of VII giving a wink and nod to a congregation striking out on their own.  But this is just one example of many things people claim to be in the spirit of VII but perhaps is not there at all – or is in fact counter to the council.
How did this happen?  First of all is the desire for where some people wanted the council to go.  And instead of following the council closely, they rode the wave of what was perceived as the general flow of the council, as if the council was the first springboard of discussion setting a trajectory far beyond what was stated.  This happened to me as I was assigned to a parish as a seminarian.  It was stated to me by one of my professors that I would enjoy this assignment because, “They have gone beyond Vatican II.”
What happens when VII documents directly contradicted the “spirit” understanding?  Something along the lines that Luther used when confronted with teachings contradicting his statements from the book of James.  He called it an “epistle of straw” and urged people not to pay too close attention to it.  Again, something similar happened to me in the seminary.  Bringing up something directly contradictory to what one particular professor was teaching we were instructed that that part of the document was a “compromise” and that it should be ignored.  There may be some truth to what the professor said but what else have we but what we have?  Could not the Spirit have maneuvered what we perceive as the “compromise” if that is what He wanted? 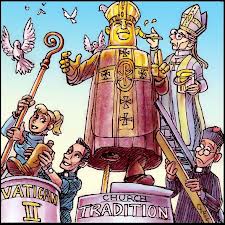 Then there is the promotion in a lot of Catholic and secular media alike that interprets the VII documents with a hermeneutic of discontinuity as if the Church before the council ceased to exist and something new was born.  But that is not, never has been, and never will be the nature of the Church.  The Church of the 1400s is the same Church of the 2000s, and, if we are still around, will be the same Church of the 2100s.  It may evolve, but it never cuts and begins over.  It is a terrible mistake to read the documents and think, “old bad: new good.”

Rather it should be read with the hermeneutic of continuity; how does the Church before VII flow into the present day Church?  How is it one?  How is the mission continued?  How is it taken as a whole?  Whenever division is part of the hermeneutic (old vs new – hierarchy vs laity – traditionalism vs progressivism) then you know you are on the wrong track. 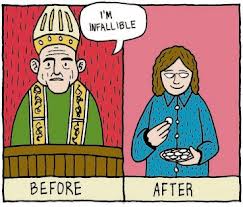 It was also taught to us in the seminary that has always taken at least 50 years for any council of the Church to be properly implemented.  (The day after Trent closed there was not a universal change in the Church.)  I thought it had something to do with communication and with modern ways of getting the word out it would take much less time.  But such is not the case.  It has little to do with communication and much more to do with human nature and the working out of what some wanted a particular council to say and what it actually said.  It needs fresh eyes.
So here we are, fifty years from the council.  I am sure there are people at all ends of the spectrum who are disappointed in the spirit with a little “s” (for this spirit could swing in any direction the interpreter wished it.)  When the tide of wishes (nothing wrong with that) pulls back revealing the bedrock of the actual council, there are many who will feel betrayed; both those who think the Church is progressing too much and those who are afraid we are being drug backward in time, when the mirage is gone and we encounter what is actually there.

This Year of Faith the pope has asked us to once again engage the documents.  To not only read them once again (or for the first time) but to meditate on them.  Stop relying solely on some misty spirit of understanding of the mountain that is VII, but to walk through the mist and touch and understand the mountain itself.  It is time to embrace the true spirit of Vatican II.
Posted by Fr. V at 7:28:00 AM

I am so glad that you survived your bad experiences in the seminary! Unfortunately too many that I see around me have not. Hopefully reading the documents of the Council with fresh eyes will help to open them.

With prayers for all.