TUESDAY QUOTE OF THE WEEK CCLXXIV

FINDING TRUTH WHEREVER IT MAY BE FOUND:  "Remember, in many ways, it's a far higher ideal to live an ordinary life in an extraordinary way, to serve an ideal amid the drab, humdrum surroundings of every day life and still retain a vision of the common man as a shadow of God."  General Donn A. Starry
QUOTE II:  "Wings are a burden even for the majestic birds that climb to the clouds, but without them they could not fly."  St. Escriva
IN OTHER NEWS:

Sharon sent this in O Men of God:

Here are two bits of Chestertonian news from the program of The Pirates of Penzance that was performed at the Standford Shakespeare Festival this past summer.  The first is a quote from the program concerning Gilbert and Sullivan in which he wrote, "it will be found that this Victorian nonsense will prove more valuable than all that was considered solid Victorian sense . . . And may be that in the remote future that laughter will still be heard, when all the voices of the age are silent."
The second bit o' news concerns the Steampunk movement of which I wrote a couple of times.  The term itself was not coined until 1987 but Chesterton is one of the authors that is considered highly influential in the movement of these retro-futurist.

RESTLESS HEART: The Confessions of Saint Augustine is a new movie coming out!  Here is a preview: 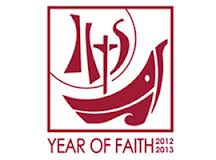 News from the Diocese of Cleveland Enewsletter:  The Year of Faith begins tomorrow.  "In his Apostolic Letter, PORTA FEDEI, Pope Benedict XVI has declared October 11, 2012 to November 24, 2013 as The Year of Faith for all Catholics across the globe."  Read more here.
Posted by Fr. V at 7:09:00 AM

Restless Heart, the movie about St. Augustine, is going to be in our area for one day only on Tuesday, October 16 at noon and 7:00 p.m. It's showing at the Historic Lincoln Theater at 156 Lincoln Way. You can purchase tickets ahead of time by contacting Jim Baltrinic at: olswa@sssnet.com or call 330-833-0675.