SO . . . This past weekend, in order to help celebrate Priesthood Sunday, Fr. P and I held a dinner at the rectory for seminarians and any young (to youngish) men of the parish who are considering priesthood.  It could range from those ready to sign up tomorrow to those who give it the remotest possibility such as if the French Foriegn Legion should regect them.  We would have considered it a success if two or three guys showed up, but eleven signed up (though one had to cancel due to other responsibilities.)  Wow.
It started off a bit rough however.  These ten guys with no real former connections (they were from all kinds of age groups) kind of sat around and stared at their glasses of pop as if they had all been sent down to the principals office and were too embarrassed to recognize each other.
The first half of the night looked a bit like this: 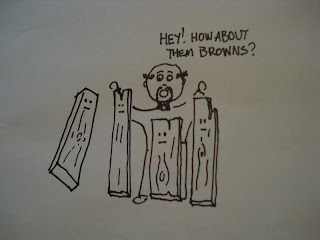 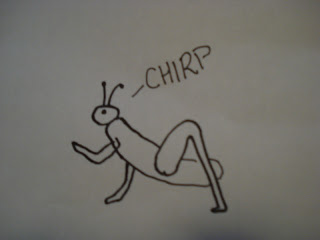 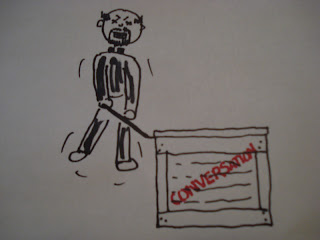 But we were fortunate also to have four seminarians there.  Over dinner (a fabulous dinner prepared by a volunteer from the parish who heard about the dinner and wanted to be a part of it AND who just had knee surgery on Friday but STILL made dinner) the priests and seminarians told their vocations stories.  They all had similar themes - our hearts were restless and found peace when we started pursuing God.  (Very Augustinian no?)  But, the big guns were saved for last.  Fr. O's story is a whale of a tale and succeeded in making everybody loosen up: 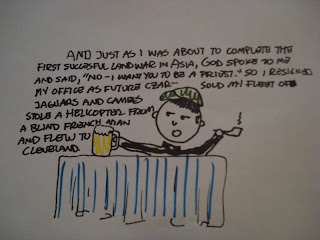 NOTE: Despite the depiction above, there was no beer or smoking at the event though it is true that the land war in Asia was not a success.
At this point everybody loosened up a bit and things became a little more fun.  One of things used to entice guys to come was a climb up the bell tower and I quote, "IF the weather was good."  It was not.  It was not remotely even mild.  It was the beginning of the Frankenstorm.  Sebastian didn't even want to go for his walk.  So I offered an alternative: 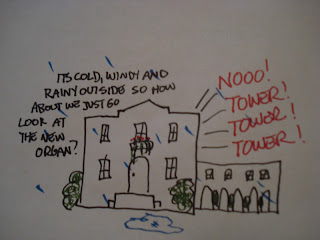 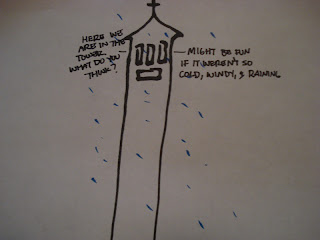 The point of the afternoon was not to lure these guys into becoming priests.  God will have to do that if it is His plan.  The point was for the guys to see that there are other men in the parish who are also considering this life - they are not alone.  And they at least asked the question seriously once.  Please keep them in your prayers. 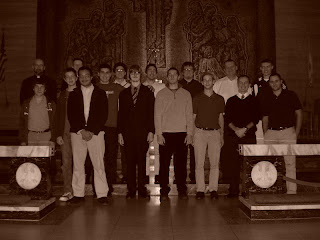 And it was also nice getting to know these men a little better also.  For instance, I found out that Paul (below) is afraid of heights, the full extent of which we did not fully realize until we were seven stories up in the tower with low railing overlooking Akron in a rainstorm.  Nice timing to come clean guy. 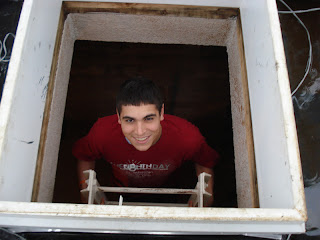 Also, thanks to Anthony, a seminarian who came to St. Sebastian this weekend to promote vocations.  He and our two seminarians, Jeremy and James, and the seminarian assigned to the parish for the year, Brian, made the day great.  Keep these guys and they guys of your own parish in your prayers that you may have priests available to you when you need them. 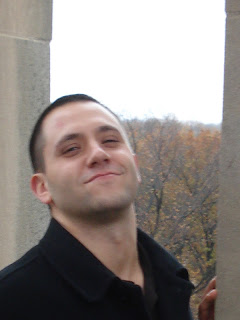 Please keep praying for my son. I still think he has a vocation but as you said it is God's will. We had an experience this weekend that "brought home" the importance of all of us continuing to pray for vocations. Our Pastor (the only priest at our parish) had the 4:00 Sat. Mass even though he was obviously sick. He got worse overnight and was not able to do 10:00 Sun.(our largest Mass). He asked the Deacon to do a Communion service. The visiting priest (already scheduled) that had the 8am Mass on Sun.very graciously volunteered to stay for the 10:00 Mass.