FRIDAY POTPOURRI: ALL FIRED UP

Saint Florian was a high ranking officer in the Roman army. One of his 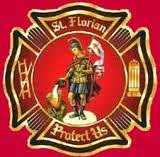 main duties was organizing fire brigades. Part of his legend states that he once saved an entire town from a fire with prayer and a single bucket of water. When it was discovered that he was a Christian he was burned at the stake. Saint Florian subsequently became the patron saint of fire fighters.

cross is very similar to the Maltese cross. The main difference is that the ends of the arms bulge outwardly. This cross most associated with firefighters coats of arms. According to seiyaku.com the eight points for firefighters represent tact and discretion; loyalty and commitment; dexterity and mental adroitness; observation, attentiveness and perceptiveness; sympathy, compassion and sharing; explicitness and thoroughness; gallantry; and perseverance.
Posted by Fr. V at 6:09:00 AM

Back in my firefighting days, I used to carry around a prayer to St. Florian. He's probably also the one who helped me get out of it and with references! ;-)