FRIDAY PORPOURRI: THE CROSS OF REJUVENATION 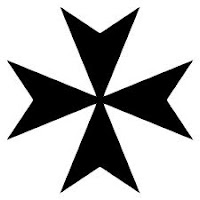 ollowing this series. It s base is the Greek Cross and since the arms of the cross flair out it reminds us a bit of the Cross Pattee from last week. The difference here is that the center of the ends of the arms point back toward the center forming eight points.

This cross was first used by Christian warriors known as the Knights Hospitaller or Knights of Malta and is roughly based on the cross used by the Crusaders. The eight points stand for loyalty, generosity, piety, bravery, glory and honor, contempt of death, care for the poor and sick, respect for the Church. They can also represent the Beatitudes. Eight is also the symbolic number for baptism since after eight days after entering into Jerusalem Christ ascended into heaven. This is why so many baptismal fonts or rooms have eight sides. Hence this

cross is also known as the Rejuvenation Cross because of its eight sides.

Father, I want to hear some more about Stratford and Shakespeare.

I have designed a few baptismal fonts . . . but never an eight-sided one.