If you are going to send your kid to a private school that boasts of itself as “forward thinking” and “progressive,” you would stop the conversation and ask, “What does that mean?” These terms and terms like “modern” and “contemporary” are often bandied about 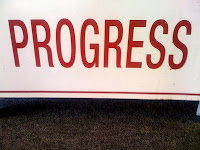 as if they carry any meaning on their own. Really than can mean just about anything as long as someone has written a book on or even thought of it recently – even if the thought has been around for thousands of years.

In ecclesial circles these words are often thrown in as justification for any kind of actions. After all, what IS a progressive parish? Is it one with a 1970’s spirit? Is it one that embraces all of what it is to be Catholic? Does it mean we only do what only the most cutting edge (again – what on earth does that mean?) parishes do and think? Does it mean thinking with the ever elusive “Spirit of Vatican II?” Even if it means any of these things – then what do THESE terms mean?

Yet terms like modern and progressive tossed about as if they have meaning of their own. In their worst usage they boarder on Gnosticism; the idea that NOW we have some secret knowledge that has been dormant in the Church/world since Adam and Eve and NOW we and our children know the path to heaven.

Using the word “progressive” and “modern” as a justified word in and of itself presupposes the progression and modern views have always been for the better, a randomness of actions and forces that have conspired to always make every moment an improvement, a concept that G. K. Chesterton referred to as more miraculous than a miracle.

Do not be afraid to call someone on their terms. What does “progressive” mean? Does the faith value “progressive” as an absolute good? Rather does she not carry a large trunk with every good thing she can find in it? “He who cannot live on three thousand years,” said Goethe, “is living hand to mouth.” We take the best of today and mix it with the rich history handed down to us. We are not only what we are becoming but also what we were. We are a people of every age – or better yet – a people of no age in particular – just the best of every age that is loyal to Christ and always building on foundations laid down for us since time began.
Posted by Fr. V at 6:16:00 AM

Jesus said something similar 2000 years ago--about the wise steward who takes from his storehouse both the new and the old.

I don't like the the term "progressive," because it is used to end all arguments. Implicit in the word "progress" is a sense of "the good." "Regression" is always seen as bad. Yet, something new is NOT always good. But by saying that all new things represent "progress," people are swayed by the implicit meaning of the word, rather than taking the time to discern whether the "new" thing is good or bad.

What a freaky coincidence! I have spent the last two days trying to write something nailing down the causes of the state of affairs in education today. John Dewey and values clarification, the Frankfurt School, political correctness, Critical Theory, Cultural Marxism, Alfie Kohn and his whole "no grades or trophies" ideas, Secular Humanism, Freudian atheistic psychology….and it all seems to boil down to overturning the Western Civilization created largely by the Catholic Church. If you have any opinions, sources, or particularly Catholic perspective on this, I would appreciate an e-mail.

ck said...
This comment has been removed by the author.
Wednesday, September 01, 2010

are we into nitpicking here? usually 'progressive' and 'modern' are said by someone who is boasting . . . . a la . . . . 'we are better than somebody else'

Thomas E. Woods has a book on the subject. You may also want to join H-Catholic (h-net.msu.edu/~catholic) and post a query there. The list members are a great font of information, especially about where to find primary sources. In fact, about a year ago, I think there was a thread on this very topic.

Woods' book "How the Catholic Church Built Western Civilization" and the works of Fr. Stanley Jaki have been invaluable to me in my study of Western thought in general. I will definitely check out H-Catholic. Thanks!

Hey, did you see Steven Hawking declared today that there is no God. Whew! Glad one of our intellectual betters weighted in on the subject! To their credit, even atheists and agnostics are calling his reasoning illogical.