If people look at Christians and think us odd for the celebration we undertake marking things they site as mythical at best, I say equally as strange is this whole idea of New Years. What is New Years after all? Why should a new year begin on January 1st? You’d think that it would start on an equinox, perhaps the spring one as the world begins to enter into new life – well – that is – if you happen to live in the northern hemisphere.

For that matter, why start a day at midnight? Not everyone does. Why not have at, say, 8:00? Then we could toast the New Year with champagne along with the desert course at dinner and then go promptly to bed before we do anything we regret like the gentleman at the gathering I was at last year – and - well, that’s another story. I just hope he got some help.

Of course, much of the world does not follow our calendar and does not mark January 1st as the beginning of anything, let alone being January or the 1st. In fact, even we admit that we are not quite sure that calendar is quite on. Give or take three years we say. Not even our liturgical calendar quite matches up with this. (Is it not interesting though as we discovered earlier this year that whatever calendar we should adopt it is of our Tradition that a week must contain seven days?)

Time becomes very relative when speaking with someone who just doesn’t get it. No, I’m not talking about your sister who can’t seem to show up for anything on time, more like my Dad who, in the depths of Alzheimer’s has completely lost the gist of time. Day/night, month/year, breakfast/dinner time, he simply smiles and says, “Huh, what do you know?” (Though for some odd reason he still loves his watch.)

What if we were able to inhabit another planet? What would happen to the marking of years or hours? How would we communicate? (Maybe we would have to start a star date like on Star Trek.) One would have to figure out what relationship one’s own time zone is to that of one on a different planet whose days might be longer or shorter. “What time is it there? 2:00 am? I thought it was noon. Oh, that was last month you say.”

What if they got to celebrate Christmas more often than we do because their planet travels around the (a) sun more quickly? Kids would cry that it was unfair that their cousins got to live on planet X because they got presents twice as often as they did. Or what if the planet just kind of glided through space? What would be used to mark (or would there even be) days? 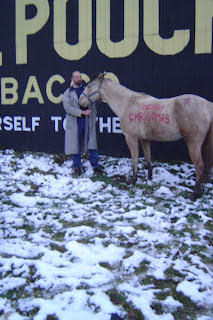 There are too many holidays right now anyway. It would be nice to spread them out a little bit more. We could use a bigger party in February. Things tend to get a little ouchy just then when you are housebound because of the snow.

Just the same, I am pleased to wish you a very blessed arbitrary marking of the passing of an artificial construct of convenience and pray that you may enjoy many more of them or of the alternate particular construct you might be observing from the various options from around the world (or other planetary or otherwise systems).

I wonder if in keeping with diversity and the ever expanding world economy that greeting will ever become popular in the retail world?

I'm just happy to have a day off from work.

I took today, too, because I'm going to Mass this evening, but BEFORE that...well I have errands to take care of that have to be done on a weekday. Right now I'm just drinkig coffee, though, and contemplating going horseback riding..somewhere. I LOVE your photo! LOL

Oh...my...gosh. I think that cartoon just gave me a brain aneurysm! Sometimes I wonder about you Father!

Good gravy, you are like filings to a magnet for weird videos. (Are we related?) Is that you with a Merry Christmas horse? I am frightened.

And I'm late for something, or maybe early. Both? I mark everything from the established day of Christmas, as I was born 5 days after. Had I come *on time*, I'd have been named "Judith" instead of "JustMe," and then what? For my name is my only saving grace some days, as He (and eventually, others) well knew.

Happy this-moment-in-time to all here. If it's more new than other times, that's good. I celebrate you either way, and the Lord loves us all as is. Drive carefully this eve, all of ya's. And/or designate a driver, please.

That's great! I am using that tonight!

...time...and what of the 'biological clock'? No, not women's biological clock - but the interior clock that wakes me up at 3:10 each morning...as I try desperately to go back to sleep fully knowing that I only have 1 hour and 35 minutes left to sleep until I HAVE to wake up & get ready for work. The same interior clock that makes me want to go to bed at 9:30 each evening, no matter if I slept in until 7:30 that morning? Or the one that says 12:00, you're hungry...not looking at the clock until the stomach refuses to stop growling. Is this interior clock due to the 'time periods' that WE created with this same calendar you mentioned in your post? Or is this something God-given? 3:10 in the morning, somehow I think it's God-given...someone needs prayers desperately. Although it's very difficult to get a Rosary or Divine Mercy Chaplet in when you're yawning...and knowing that as you finish your Rosary, you're going to be up from now until 10 minutes before the alarm is set to go off.

I think it is you-given, to God, for love. You're in good company, as you know; many saints and saints-to-be purposely rise at ungodly times to pray for the unprayed for. At 3 and at 3, we can pray a Divine Mercy and a rosary, and then, do what the body needs to do. That is made of both love and humility, and we cannot thus go wrong. Sometimes, we must be obedient even unto sleep, because that is of God, too, so asking our angel to guide us directly to where we should be in this moment is sometimes very quickly comfy. Even St. Francis ended up apologizing to Brother Ass for his terrible care.

I often wake up at exactly 3 am. Although even though I'll start praying a Divine Mercy chaplet, I'll fall asleep during the Our Father or Hail Mary! But if I DON'T pray at all...I can't get back to sleep!

Anyway, now I've had coffee, car problems, forgetfulness and the like, and so I can say...

Happy New Year (or Happy Arbitrary Celebration, whatever you prefer...)

“Anno Domini MMVIII”—In the Year of the Lord 2008: the liturgical birthday of Jesus is the beginning of the year

Pope Gregory XIII in A.D. 1582 introduced the calendar that the Western world uses.

December 25 is the first day of the Octave of Christmas, celebrating the birth of Jesus as a single, eight-day, liturgical solemnity.

With its final day, January 1, the octave of the birth of Jesus is complete, and the new “Year of the Lord” (the Lord Jesus Christ) begins.

To him be everlasting glory!

boffo, i say!
i don't know hat that means any more than what you said.
and as for the graphite dust amongst the wood shavings, well, just empty the pencil sharpener more often. when you spill it all out onto a tabletop, the graphite dust will tell the future, just like tea leafs.

Have a happy one this future.

Too many holidays? Pish posh! Over at Per Christum we are always looking forward to obscure santi e beati... I have already started baking cookies for the feast of Blessed Beata Maria Anna Soureau-Blondin... Why, it's just around the corner, man!