TUESDAY QUOTE OF THE WEEK XXVII

FINDING TRUTH WHEREVER IT MAY BE FOUND: “The works of Homer and Aeschylus and of the Greek sculptors are plants growing in our own garden” – Russell Sturgis

QUOTE II: “At St. Anne’s Psychiatric Clinic a patient cried out in bed, ‘I’m a prince! Arrest the Grand Duke!’ Someone went up to him and whispered in his ear, ‘Blow your nose!’ and he blew his nose. He was asked, ‘What is your occupation?’ He answered quietly, ‘Shoemaker,’ and started shouting again. I imagine we’re all like that man.” – Satre

Rob over at Catholic Scripture Study (it is still not too late to get caught up and join) has this link for the liturgy of the hours.

This does not speak to the mission of this blog directly but I find it interesting (and funny). Steven Colbert interviews Andrew Keen concerning his book that claims the internet is destroying culture. Particularly he points to non-professional reporters of news not living up to standards and how art is being stolen and artists (and consequently everyone else) suffering for it. Yes, there is a lot of silliness, but it also is an important question. It is about 5 minutes long.

glumbert.com - The Internet is Killing Our Culture
This last Saturday was the closing of the Feast of the Assumption in Cleveland’s Little Italy. The Feast (not to be confused with the Fest) has been celebrated at Holy Rosary Church on a more gran 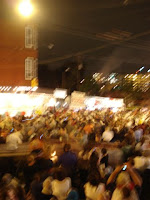 d scale than your average parish for over 100 years. The current pastor has done a lot to return to the mammoth feast day celebration from a beer drinking excuse to having some real connection to the commemoration of this awesome mystery. The volunteers are trained in evangelization and have a confession service provided for them before the event begins. Masses and a procession mark the beginning of the Feast. This year our own Bishop Lennon had the opening mass and the next night it was Archbishop Broglio who is a Cleveland native.

Saturday night was the procession to bring Mary “back indoors”. The crowds in the street were so packed from one side of the road to the other that it was almost impossible to move, but Cleveland’s finest cleared a path for us. The procession made its way through the streets of Little Italy around 9:30 PM lead by Cleveland’s Italian Band, followed by persons in nationality costumes from around Italy, then a bevy of nuns, priests and brothers singing “Immaculate Mary”, Mary being carried on a bier by eight stout men in black and white, followed behind by parishioners with blue and white votive candles. 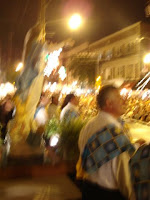 The procession ended in front of the church, which formed a sort of balcony over the crowd. There were thousands of people there. I’d always wondered what it would be like to be on the balcony at St. Peter’s in Rome when the square was filled with people and now I have a pretty good idea!

A prayer service was held and during Fr. Rocco’s reflection his microphone went out just after he said, “Jesus Christ is Lord.” So we concluded with an Our Father, a blessing, and then the fireworks went off over the tops of the buildings. All and all quite the thing to see.
Posted by Fr. V at 2:51:00 PM

Email ThisBlogThis!Share to TwitterShare to FacebookShare to Pinterest
Labels: Feast of the Assumption, Quote of the Week

Hey, isn't Sartre on that forbidden book list thing? I'm turning you in!

Drat.. I was hoping another would've asked, but now I'll have to: Did anyone arrest the Grand Duke yet?