SYMBOLIC SATURDAY - I'LL GIVE YOU A HAND WITH THAT INTERPRETATION

You can tell a lot about a person by looking at their hands. As parishioners come up for communion you can tell who works hard with their hands for a living and who needs to write notes to remember to call someone about homework. There are very young hands that are smooth and plump and old gnarled hands of age. You cannot know everything about the person, but you can surmise much.

So it is with depictions of the saints. Hands are very important. For example you might notice that they have on them the markings of the crucifixion. If from other contextual clues you have surmised that it is a depiction of Christ, you know, obviously, that the scene is from after the resurrection. If it is not Christ it is of a saint that was granted the stigmata and so search for further clues as to whether it might be Saint Francis or St. Pio or some other saint.

Objects in the hands of saints are fascinating. Often we see weapons. St. Paul is often seen with a giant sword in his hands. I used to think that it had something to do with the way he spread Christianity, “Like a warrior, using the Word like a two edged sword!” But these weapons are all instruments of their martyrdom.

Some are very general such as with the sword that may mean a general martyrdom or beheading. A battle axe pretty much suggests that the saint in question was beheaded. Clubs should be fairly obvious as are rocks which St. Steven is often seen carrying. Saint Bartholomew who we celebrated yesterday was filleted alive and so he carries filleting knives. S 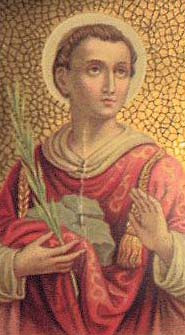 ome saints had their skins racked off of them with a wool comb and so proudly display that by which they showed their love of God.

Some saints have rather unique objects that are readily associated with them such as St. Catherine’s wheel. St. Lawrence who reportedly had a great sense of humor clutches the gridiron on which he was roasted. Legend has it that he told his tortures, “I’m done in this side, you can turn me over now.” St. Peter of course embraces his cross which is reversed from Christ’s cross for he felt unworthy to be crucified in the same manner as our Lord. Then there is Saint Andrew whose cross resembles a giant X.

One wonders what modern day martyrs will be shown holding. For example, will those shot ever hold a gun or bullets? One author suggest in the future we might use such objects as electric prods and bombs. Who knows?

One very interesting Church is St. Nicholas Croatian Catholic Church in Millvale, Pennsylvania. The artist, Maxo Vanka who painted the church in the late ‘30’s and early ‘40’s did a wonderful job of using tradition symbols for an updated message. One in particular called, “Injustice” is difficult to look at and not just because of the gas mask that the allegorical figure is wearing. Once again, look at the hands. Thick gloves cover them as if trying to protect itself its own dirty deeds. It deals with things of this world with disdain. In one hand is a mighty sword, but it is not the sword of its own martyrdom but the weapon that slays its many victims. In the other hand is held scales of justice, but the bread (Jesus) on the one side is far outweighed by the gold contained in the other. Fascinating!
There’s more on hands but that will be continued next week.
Posted by Fr. V at 6:55:00 AM

Of course, it also brings to the forefront one's fears of the pain of being martyred in the Cause. Jesus is indeed still hated and feared as much these days, perhaps more than ever whereas the prince of the world's time is ever shrinking, for it seems his torments as well as confusions and muddyings of lines are ever escalating.