Hey! Peeve Week is over! Aren’t you relieved?

When looking at a depiction of a sacred personage, you can infer quite a bit from thier halo or nimbus. A nimbus (Latin for cloud) is defined in the Catholic Dictionary as an “artistic depiction of a person’s holiness represented by a round white or gold image above the head of a saintly person. The nimbus is often called the ‘halo’”.

The most common form of this is a plain circle either colored in or no around the head of the saint being represented. There are, however, certain halos reserved for certain personages. Only a person of the Blessed Trinity would have a nimbus with three usually red or gold rays inside of it. Thus whether the depiction of the Trinity be in the form of a human, the Lamb, the Hand of Creation, or a dove, you will be able to tell it is of the Trinity from the this special halo.

God the Father has one of his own. It still contains the three rays but instead of the halo being in the shape of a circle it is triangular.

A nimbus with a great amount of decoration on it is traditionally reserved for a person of the Blessed Trinity or the Blessed Virgin Mary. Saints should have little to no decoration.

It may be desirable to depict a living person and mark them as a particularly benevolent person (or perhaps they just gave a whopping amount of money to renovate the church and you feel obligated to include them in a painting of the crucifixion on the ceiling of the nave). They would have a square or diamond shape halo. Since the square is a symbol of earthly things, it is appropriate that it be the shape of a person whose address is still of an earthly nature.

There may be a case where one wishes to depict an allegorical person. In order to help people know that the person presented is more of an idea than an actual person, an octagonal nimbus is used. So if you wanted to paint Justice and Peace sitting in a tree k-i-s-s-i-n-g, you might use this halo.

When I was very young they still showed cartoons before the movie at the West End Theatre. It was almost always a Bugs Bunny cartoon. At the beginning of the cartoon Bugs Bunny’s face would appear with rays of light shining all around it. The unspoken message was “Get excited folks! It’s Bugs Bunny!” We use a similar nimbus called an aureole and it is reserved for the Trinity and the Blessed Virgin Mary. It encompasses the whole body.

Finally is the almond, or mandorla, or vesica piscis. It is created by two overlapping circles.

Picture the two circles on the MasterCard logo. The center section where the two circles overlap is the shape we are trying to get at. Sometimes it has scalloped edges or surrounded by angels or seven doves. It is normally only used to depict Mary when she is pregnant with Jesus, and during the Assumption or Ascension.

Below are examples of this in the windows of the Assumption and the Ascension from Saint Clare. It is hard to see I know, but behind Mary and Jesus is this almond shape. 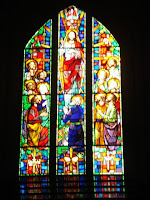 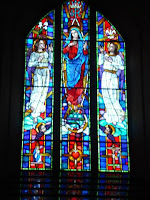 More stuff I didn't know! Thanks.

Father V, this is a masterful post. Oh, excuse me: master card. LOL!

Like rob, I learned a lot of stuff I did not previously know. Thanks.