THIS IS BECOMING A HABIT

Have you ever walked down the street and noticed a policeman, fireman, doctor, or even a priest? You probably noticed them because of what they were wearing. What I find most disheartening is what you TYPICALLY don’t see while walking on the streets are habited nuns. Don’t get me wrong, I’m sure there are some nuns roaming about, however, you would never know. I thought nuns, like priests, are supposed to be a visual representation to the world, show they are married to the Church, and are giving up their life to serve it. It marks their life as a living witness and shows their detachment from vanity and greed. I, along with many others, believe that nuns should wear the full habit.

A while back, at the recommendation of my parish priest, I went on a “Where Are You Going” retreat that the diocese was putting on. The retreat up was at the seminary and I felt very uncertain about going, as this would be a step in the right direction for discernment of a religious vocation. I still went, afraid as I was, and put myself into the unknown. While there, we had the chance to talk to some of the sisters, habited and non-habited. Sitting down at the table, I chatted with some non-habited nuns. They told me they were Dominicans I was excited and let them know that I would be heading off to Nashville to visit the Dominicans there. (The Nashville Dominicans are a habited order.) Once I opened my mouth they got up from the table and vanished. My reaction was one of dismay and hurt. Are you kidding me, because I mentioned the name of another order that wore habits I was unworthy of their attention?

After they vanished, I wanted to run and start questioning them. What made them not want to wear the habit? Were they ashamed? Did they think they were giving up too much of themselves? If so, I guess they didn’t realize what it meant have a religious vocation. I believe if you had this type of vocation you would take pride in the spirit of your order and what you have been called to do and want to make that known to the world. Wearing the habit is a sacrifice, to be recognized as a spouse of Christ, to be connected to tradition, to humility, and to a life centered on Christ.

I had a friend that just received the habit from The Sisters of Life. She had sent a letter and told me about receiving the habit and her experience wearing it. She said receiving the habit was one of the best moments of her life. She exclaimed how beautiful and how much deeper she was drawn into Christ’s warm embrace. AMAZING!! She said the first time she wore the habit while in the Bronx, where her order is located; she received some of the weirdest stares. At first she mentioned that it was a bit uncomfortable, she was not sure how to even move in it and of course it made daily work much different. But what I gathered from her letter was that she embraced the habitat as a new piece of her, a visual piece that gave no questions about what she was doing with her life. She didn’t need to tell people what she believed or what she did; they could see it first hand. 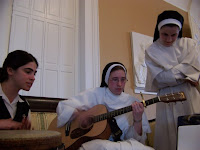 I am a firm believer in the fact that part of the reason younger girls are not joining religious orders is that many of the orders are not wearing a habit. If you take a look at thriving orders, they are all wearing habits, they live in community, and have taken the vows of poverty, chastity, and obedience. At a time when the entire world is in chaos, young adult women are finding solace in these vows and in an order that upholds a tradition. Most of the new orders springing up do not have a common chrism, they do not live in community, and they do not wear a habit. It angers me when I hear that the Church traditions are not important to these new orders. I often wonder if they feel that by organizing a new order that is more lenient and to their liking they will bring in more vocations. If that is the case, what are they giving up, what does the act of laying ones live down for Christ mean to them? It apparently means little to nothing. Not that these orders aren’t doing good things and helping people, but this is not what an order should be, it should be sacrifice and discipline. Mary, Mother of the Eucharist is a newer order that has girls knocking down their doors to enter. They are a great order that is centered on their vows, wears a habit, lives in community, and cares greatly. However, if you know anything about their history, you will find that they branched off from the Nashville Dominicans who have been around for hundreds of years. This I believe is an exception to the rule of new orders. I feel there is much work to be done with newer orders examining their place in the world and if the Church is really calling for more orders to spring up instead of valuing the orders that we have now. 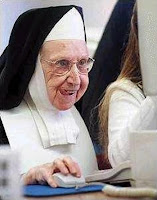 I hope and pray that with the new Bishop in the Cleveland diocese, he will reaffirm the tradition that the Church upholds and put some focus on women’s religious orders. There are a vast number of girls looking to answer God’s call and would like to stay in the Cleveland diocese, yet they feel they won’t find a home. Please pray for the increase of vocations for orders that are staying close to their roots of poverty, chastity, and obedience.
Posted by Habemus Papam at 8:44:00 AM

Amen, and God bless you in your vocation!

I completely agree. I'm a "2nd career vocation;" have been discerning for a little over 2 years now. I've visited numerous communities in the Benedictine & Cistercian tradition (for men of course) and they all wear the habit. On one of my discernment retreats, there was a group of us & the vocation director took us on a roadtrip to visit a community of Benedictine nuns. I was excited to meet them! I was very disappointed to find, however, that they didn't wear the habit. They had 1 woman discerning, and the monks had 8 of us guys. The Abbess remarked to the vocation director, "Why do you guys always have so many more men interested than we do women?" He was silent. I knew the answer; more of a question: "Where's the authenticity?"

This is a great post. I'm so happy to hear that there are orders of young nuns who proudly wear their habit! I miss seeing sisters in habits in schools, hospitals, church...anywhere. I also like to see priests wearing their collars-our new pastor was walking around the church office in regular clothes before I realized, after he said his first mass, he was in fact our new
pastor! Which brings me to this question- do you have an opinion on priests and sisters wearing their habits and collars during "off" time-while doing public errands/grocery shopping and such? It just seems strange to run into the bishop at Walgreens(I really did!) in his street clothes, but maybe I'm being too harsh. :) I'll be praying for more vocations, God bless!

I agree with your post, too. Habits for nuns truly are representative, to me, of their sacrifice and service. I love the photo posted of the elderly nun and the computer. The habit isn't holding her back :)

Someone once said that young people will devote their lives to a mystery but not to a question mark. Love those nuns in habits!

With our luck, the Diocese of Cleveland may never have an energetic, evangalizing bishop. So it is time for the laity and clergy to get to work. Pray for vocations!!!

I want to wear a habit--and I'm not a nun--what a statement about who you are and what you believe--bring back the habit and women would flock into the order.

Thank you for this post and your blog. I visit often.

We always thank any nun we see in habit for wearing the habit. We miss them and are so encouraged about the nuns in Michigan and elsewhere who "set themselves apart".

I remember when the Sisters of the Precious Blood stopped wearing their habits. Their order fell apart in our diocese, and now they are all gone. Such a shame. Many of them taught at the Catholic school, and now there are just lay teachers there.

Habits and clerical garb, all the time. Yes, yes, yes.

When I was discerning (and if I ever do again), sorry, but the only orders I will consider is those who wear the habit.

Part of this comes from an incident in Mexico; I was there for a semester, had no money but had to get to my practicum the next day. My few pesos had to suffice.

And who was on the combi (Public Transp - a VW van type), but 2 Sisters in black and white habits. I knew that with them present in their habits, no one would laugh at me. And so I spoke up and asked the other passengers how to get to location X. They first looked to the Sisters, then among each other had a conversation. The Sisters were also involved in helping me find the right bus. I do believe that the people who were there would likely have been as helpful if the Sisters wern't present, but in reality, I would not have had the courage to speak up. And by the way people reacted...I'm not sure some of them would have answered so publicly if they Sisters hadn't been present. And when the pair disembarked, they both looked at me, "Dios te bendiga" and left.

And I FELT blessed. And in fact, they were a very direct answer to a prayer to God to help me find a bus route to my practicum. Bus routes are not published in Mexico.

Although I wasn't much of a Catholic at the time, I recognized these women for who and what they are, and I knew they were a palpable sign of God's grace. ANd so were the reactions of the other passengers; the respect was obvious, and I guarantee you that not all the passengers were Catholic.

People in clericals are seen as being "holy people"; whether that is true or not God only knows, but in reality, they are identified to the public, and we need that.

As a friend of mine, an Evangelical Pastor commented once, "You never know who is watching you."

So true...even more true when you are willing to stand up in a uniform that defines you as a direct representative of Christ.