His Excellency Donald Trautman of the Diocese of Erie and chairman of the U.S. Bishop’s Committee on the Liturgy (BCL) is urging his people to write to a list of Vatican and U.S. Church officials to protest the latest translation of the Mass according to an article in the Adoremus Bulletin. I thought this rather not the way Catholics went about such things. I wonder if he would be open to such maneuvering if it were a movement by his own people against something that he was doing. This effort could backfire on him when it is time for him to do something unpopular. If this is a good thing to do would it be unethical for those who are for the new translations to start a campaign against the bishop, to urge people to write to the Vatican and to prominent persons in the Church in the United States and indeed inundate Bishop Trautman with pleasant but contrary missives to allow the translations to go through? What if we do not like them once they are out? Should we start a new campaign to have them changed again? I find the effort very disturbing.

A few weeks ago a pastor wrote an open letter to the pope in his parish bulletin concerning the pronouncement that the Catholic Church was indeed the Church founded by Christ containing the fullness of truth and being the normative way for one to get into heaven. He took him to task and suggested that he should have kept the whole matter on the QT. Instead of taking the pope to task, it might have done this pastor well to help his people understand what was being said and how to address the issues in their own lives. His comments seemed more destructive than what he was opp 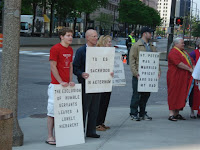 Why is it that being anti-institution is so admired? Instead of taking what we have and trying to help people through it and appreciate it, self-appointed evaluators challenge every teaching of the church from pulpit to pew (or blog).

So the other day I was visiting a priest friend of mine who had a book sitting out on his table. It was entitled, “The Catholic Priesthood and Women.” I was just about to give him a tongue-lashing, “O for Pete’s sake! Not you too!” But he gleefully pointed out to me that was subti

tled, “A Guide to the Teachings of the Church.” The book written by Sr. Sara Butler MSBT, professor of dogmatic theology at St. Joseph’s Seminary in New York takes seriously John Paul II’s statement in Ordinatio Sacerdotalis, “I declare that the Church has no authority whatsoever to confer priestly ordination on women, that this judgment is to be definitively held by all the Church’s faithful.”

I was rather impressed. Here was a person who got it. How long to we dialogue before we say, “Enough!” Let us move forward. Learn why the Church teaches as she does. Let us learn to cope with what we have because being stuck in a moaning rut is not productive. It keeps us chasing our tails while more productive work of the Gospel goes undone. Forward Christian soldiers!

The former liturgist for the Diocese of Cleveland a number of years ago met with interested persons throughout the diocese about changes in the liturgy. The lectionary was new then and it was brought up by several people that it was a poor translation and difficult to read. The priest pressed its merits but to no avail. He then confided that despite how we might feel about it we might as well do the best we can with it and move on. What was being accomplished other than wasting our time complaining about it? It was not going to change any time soon.

I thought a lot of him for that. Of course, we don’t roll over and die to everything that comes our way. There are battles worth fighting. But some are over and there are still soldiers fighting that just don’t realize it. Other battles need to be fought on the right field. And still other battles are worth just so much effort and then we need to get on with business.

“View everything sub specie aeternitatis.” When studied from the point of eternity, a lot of our fussing can seem quite silly.

Maybe if someone posted Bsp. Trautman's address, we could all share our feelings and opinions with him...

-Why is it that being anti-institution is so admired?-

Because people think Jesus was 'anti-institution'. They don't read scripture and see how almost every healing finishes with "now go and do what the priests say" or "go and do this for the priests", and how Jesus loved the temple.

They think they have a divine mandate for rebellion, when it's actually the opposite. Paul tells us to submit to our appointed rulers.

Rob, what an excellent point.

This might be as good a time as any for the Faithful to write to the Holy Father and, simply, thank him.

Bishop Trautman's column with his request for input:

is Bishop Trautman protesting a translation that came out of his own office? Makes me want to print up another batch of "Never trust a liturist" bumper stickers.

It makes me think if there is a single competant (or uhm...orthodox...) person on the committee...from what i've heard, His Excellency has been known to 'lean a bit to the left when the wind blows' whatever that means ;-)

I swear if my latin were just a bit better i could come up with a simple yet poetic translation of the Missale Romanum...

Though...hey...with the new indult...one wouldn't necessarily have to even become to familiar with the new translation ;-)

Thanks! Actually I think that he makes some valid points as far as the translations go. I am pondering however if we are going to be ready to be so democratic about everything that "hits the pews" or just his selected beef. Americans are ready to jump at such interventions and once that can is opened, there will be no closing it. But if so, let it be . . .

Well, let's take the ordination of women which John Paul 11 ordained that not only could we not advocate but we could not even discuss.

Well I have discussed it with a number of established Scripture scholars. Not one of them judges that the arguments against women's ordination in Scripture, are persuasive. And when you get far enough back in tradition things get pretty shaky too.

Are we supposed to park our brains at the door when we examine controversial doctrines in the Church?