TUESDAY QUOTE OF THE WEEK XXIV

FINDING TRUTH WHEREVER IT MAY BE FOUND: “It didn’t seem to have occurred to the well meaning vandals who’d thrown out baby, bath, and bathwater that all ritual is reaching out to the unknowable and can be accomplished only by the non-cognitive: evocation; allusion, metaphor, incantation – the tools of the poet.” From “Father Joe” by Tony Hendea.

At midnight on Tuesday night two new websites are slated to make their debut in the cyber world. The first is a website for priestly vocations in the Diocese of Cleveland at clevelandcatholicpriesthood.com The second site concerns all other priestly and religious vocations in the diocese at clevelandcatholicvocations.com. Congratulations guys! Looking forward to it!
The FEST is coming up. I'll be there giving tours of the seminary (where the air conditioning is!)

My cousin sent this link in of a Global Incident Map. It is interesting but perhaps more than I want to know. I'm growing so weary of end of the world senarios that I do not even watch the weather report anymore.
Kaz from NY sent this in over the weekend. Thanks! 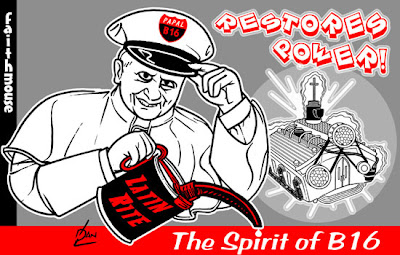 It seems that due to the hard work of Habemus Papem we are gong to World Youth Day next summer. Hope to see you all there!
Posted by Fr. V at 6:54:00 PM

on the advise of counsel, i plead the fifth ... PLEASE - somebody get me a 5th of something ... anything

i won't be at FEST

the global incident map was somewhat interesting for a while

i'm glad you get to go to WYD

i don't divide the world into two groups

i hope the new diocesan web-sites get lots of hits

Is the global incident map supposed to be anything besides annoying?

I've never been to the Fest, but I have heard great things about it.

Unfortunately, we are out of town this weekend so it's not even an option for us to attend.

We had a seminarian come to our mass to invite people to the Fest, It hought that was a very nice approach!

Will be at The Fest this year (my first time) with quite a few friends. I keep hearing great things about it.

The Global Incident Map is quite freaky! (and I work for the government)... what I want to know is why there are so many incidents in the U.S. that we have not heard about.... Okay, so I don't watch TV & only listen to the Christian Music radio station...and don't read the newspaper. Somehow, I don't think divine intervention would work here, would it? *grin* I'll find a way to keep myself informed...not quite sure how, yet.

A virtual 5th for Uncle Jim. (The pickings were slim, considering I didn't leave the house. I hope you like "Manny being" Merlot. They wouldn't let daughter fly it back to Ohio for her husband.)

There are two types of people in the world: Those who need a nap after a turkey dinner, and those who need to hike after one. Guess which one I married.

I'll be at the FEST in spirit. Particularly near any fried dough stands, or Jesuits.

Where is next summer's WYD going to be held? How exciting! Well done, HP!

Re: the Global Incident Map:

That's it. I'm moving to Sudan.
Nothing's happening there.
;)

Okay! Okay! The Global Incident Map was a mistake! (And annoying.)

There are two types of people in the world - those who like FEST and those who don't - Okay, 3 types - (a la theocoid) those who stay in the airconditioned seminary building and are free from having to make any jusdgement on it either way.


But IF you are there - hope to see you.

someday, we'll make it up that way ... perhaps at FEST-time some year in the future ... or if not then, at some other time enroute to Buffalo from IN to see our son and daughter-in-law ... or just for a get-a-way weekend [we actually spent our honeymoon weekend in cleveland - i was working 6 days a week and had to get permission to miss saturday for my wedding, then to cleveland for a one night honeymoon and back to toledo for work on monday morning - who'd think an oil refinery job could have such control over a guy]
but FESt or no FEST, we'll get there someday - we just gotta get to st claire and see the attack rabbit

See you at the Fest and I'll be bringing some to see the seminary. My son will be at Firestone ( go figure). He says I'm a protestant for going!!

I quite like the Global Incident Map.
It's those dark circles under Papa's eyes that scare me.
;)