I SEE WHAT YOU ARE SAYING 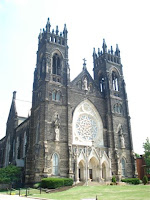 A while back on my day away from the parish I went on a pilgrimage of sorts. I owed God a thank you for taking care of my family during a rough go of it and so hopped on my bike and rode the Ohio Canal Trail from close to my Dad’s house down to Massillon where my Dad had been hospitalized. On my many previous trips down there I took to getting off on and exit that was not quite convenient but took me past this gorgeous Catholic Church. Knowing the Blessed Sacrament was contained within I would say a prayer as I passed by asking for His aid. This day I stopped by to say thanks.

I am ashamed to say that if St. Mary had looked a bit more like a Walmart than a Catholic Church (which we are trending toward) I probably would not have thought to go out of my way all those days in order to drive by and ask for His assistance. But there is something about this building that says, “I AM HERE, WHAT DO YOU NEED?”

The place where modern architects make their goof is that while they may be creating interesting shapes, challenging engineering feats, playing games with shadows and light, maybe even creating art, they forget the basic premise, the purpose of this type of building, which is not to inspire man but to inspire man toward God, the common man toward God, to look up, praise God, think on Him, give hint to His presence within, to stand out as different from other buildings

The edifice does not have to be nearly as dramatic in scale, art or symbolism as this and in fact most are not, and they still work and work quite well. But let's take a moment to look at Saint Mary Church (even though this is not symbolic Saturday) and dissect this façade and why it works. 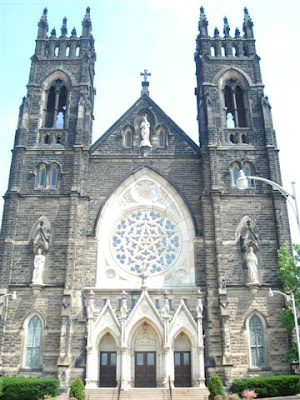 Notice the basic Gothic structure of the building. Everything about it points upwards to the heavens. The towers themselves dwarf humans and seem to dissipate into the sky. If you spend any time gazing at this building your eyes will automatically be drawn upward. There is no denying that this is a church and a Catholic one to boot. No sign needed here. And there is such beauty one is attracted to it. I couldn’t even tell you what is across the street.

At top center is a statue of Mary, patroness of this parish. The statues to the right and left who keep guard over the entrance to the church are Peter and Paul who brought Christ to the world. The center of the rose window has a star. Often the star has been used to symbolize the five wounds of Christ. I am guessing that this is what this window represents as just above this window there is the “IHS” and the three nails of his crucifixion. The three doorways leading in are united in the architecture as one giving testimony to our God, three in one. 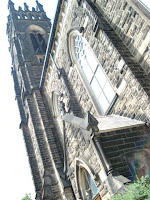 Wanting to go inside I found the doors locked, both frustrating and understandable, so I offered my prayers on the steps (would I feel silly doing that at St. Walmart?) I was scared however when I say the giant windowpanes were of faceted glass. I have an aversion to the art form, perhaps because so much of it is bad. Maybe yet I’ll find some that I really like. But even more distressing is that in such a grand edifice as this; it is usually a sign of a really awful 1970’s wreckovation. But peering in the one window in which I could see revealed a glimpse of an ornate communion rail and pulpit so perhaps all is well in Massillon.

There have been tiny Catholic Churches with a fraction of the symbolism and art that can inspire like actions, it simply (ha, simply) requires all involved in the project to remember basic premises and purposes of the building. We are not a “with it” organization. Besides, as Archbishop Ambrozic once wrote in a note to me, “There is many an “it” that is not worth being with.” That goes for architecture as well.
Posted by Fr. V at 5:47:00 AM

I couldn't agree more. Our parish, founded in the early 1950's, was a "temporary" parish for a long while & was quite modern. We didn't build a new parish church until 1988 and, while I've seen infinitely worse, it's still modern. Bleck. I often travel the 20 miles to go downtown to our Cathedral Basilica. Everything about that structure is about glorifying God and is OBVIOUS about it. Also, the Masses are always reverent, without exception. ** sigh ** I sincerely hope the boomer wreckovation spirit dies quickly.

Lovely, the building "draws you in." A Church is a place to worship God--inside and out. Symbols on the outside tell about what's going on in the inside. On the inside, looking around the room and seeing beautiful symbols, works of art, stained glass, when your mind wanders--it wanders to thoughts of God. Nothing is too good or beautiful for God!