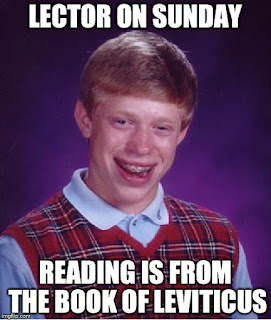 Nobody has a right to any ministry at Mass save for the most important one which is to pray the Mass and offer up your own sacrifice.  Nobody has a right to be an altar server, EMHC, or even reader.  It is never recommended that someone be given a ministry to perform who can’t quite do it in order to be “fair.”  When the ministry becomes about a certain person, it is their mishaps or inadequacies that becomes the focus and the prayer of the congregation suffers.

So, for example, in the absence of an installed lector, a reader may do the readings.  But, according to paragraph 101 in the GIRM, this person should be, “truly suited to carrying out this function and carefully prepared.”  This is so that when a reader reads, he or she does not become the focus of attention but that they become a finger pointing toward God, or, as the GIRM itself says, this is so that the congregation, “by their hearing the readings from the sacred texts  . . . may conceive in their hearts a sweet and living affection for Sacred Scripture.” 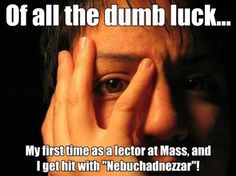 Of course, there is a certain amount of leeway here.  There is no universal test to be a lector.  Everybody has an opinion.  Readings should be more/less dramatically read.  They should be read more quickly/slowly.  There are considerations to be weighed such as how adequate of a sound system, if any, is used, how echoey is the space, to what group of people is the reading being proclaimed.  Absolute rules are difficult to put down for universal observance other than, “suited” and “prepared.”
Posted by Fr. V at 6:05:00 AM

There is so much value in not getting what you want. In being told no or wait. Most people don't like it or enjoy it, but it is still a very important thing to be able to handle.

I think we have to be careful about proclaiming that the faith don't have this right or that right. It's pretty clear that the faithful have numerous rights (http://www.vatican.va/archive/ENG1104/_PU.HTM) and many of these pertain to involvement in worship, etc. Is there a direct quotation from the GIRM or canon law or some other source that says specifically what the faithful do not have the right to? Or is this just a supposition on your part?

There are indeed rights and obligations listed under Canon Law for the Christian Faithful. Might be a blog post in the future.

Concerning the Mass, the faithful have an obligation to assist at Mass if it is needed. The various locations concerning possible ministries that one might do have requirements. In this particular case, it says that a person must be "truly suited" to carrying out this ministry. If a person is incapable of reading so that people can understand them, then they should not do so. Nobody has a right to a ministry. In fact, they make this very clear when you are in the seminary. You may have the best grades, be very popular, and wow them in the parish - but you do not have a right to the priesthood. One must be both suitable and called. Similarly just because somebody really, really wants to read does not mean that they have a right to. Usually it is the reverse case - we really, really want them to but they demure.

Granted, "truly suited" is a bit ambiguous. The determining factor is ultimately the celebrant.

I think you are correct in saying that we must be careful - I've seen terrible things in ALL directions.