FRIDAY POTPOURRI: TO SERVE AND TO PROTECT I grew up in a very small, ethic parish in which I was related to half of the congregation.  It had no boundaries so people could come from quite a distance.  We lived a couple of blocks away so if they needed a server, we got the phone call.  During the snowstorms of the ‘70s, my parents would slap cross country skies on my feet and send me off to serve morning Mass where it would be me, Fr. Ozimek, and Mrs. Bailey the organist having Mass - everybody else being trapped in their houses.

One day I walked in and Fr. Ozimek said, “You’re serving?”  Having been on the altar quite a bit at that point I responded, “Yeah.  I have to serve again.”  He got a very serious look on his face and corrected my sentence, “No.  You GET to serve again.” 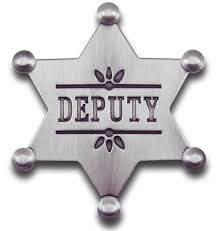 In the absence of instituted acolytes, paragraph 100 uses a great word: lay people may be “deputed” to serve at the altar.  That word makes me think of a sheriff of a small town during the taming of the West tossing a gold star with the word “deputy” on it to someone who would help keep law and order in the town.

Now that I think about it, maybe it isn’t all that different.  Save for the star.

They also carry the candles, the bread, wine and water, and may even be deputed to act as extraordinary minister of Holy Communion along with a list of other jobs that any particular parish may load upon their shoulders.
Posted by Fr. V at 6:07:00 AM