This is not the usual fair for Monday Diary.  It is a little more serious.  But it is a story I want to tell.

We have had a gentleman visiting us at the parish recently.  He is obviously not Catholic, not interested in being Catholic, but likes to have a warm dry place to hang out for a little while during services.  He is completely harmless but can be scary at times because he likes to pray.  Loudly.  As he walks through the pews.

This usually happens during confessions and one or the other of us has to go out and say to him, "You can stay here, but there are prayers going on in those rooms so you must be quiet when you pray."

This past week he has taken to locking himself in the bathroom.  For hours.  I have to coax him out because if he stays there all night, the motion detectors in the church will go off and then all get out breaks loose with alarms, police, the dog, and a couple of hours of lost sleep. 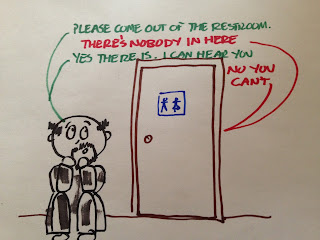 On Sunday, there was a concert in the church and sure enough, our visitor was there and decided to take up domicile in the bathroom again.  Fortunately it was a small crowd and we could do with one less bathroom.

After the concert, as I was locking up, I knocked on the door and told him that he needed to get out of the bathroom now.  He refused.  "I'm giving you five more minutes and then I am unlocking the door."

So we were able to come to agreement that he needed to leave the building and I left to take Sebastian on a walk.

MEANWHILE:  Fr. Pfeiffer was visiting (taking a nap whilst I aired out the dog) and while I was walking I remembered that my phone was off because I was at the concert.  Turning it on, I found this message from Fr. Pfeiffer. 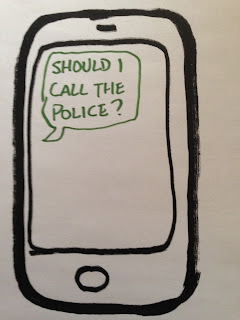 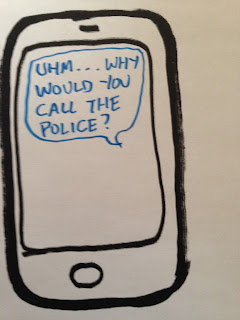 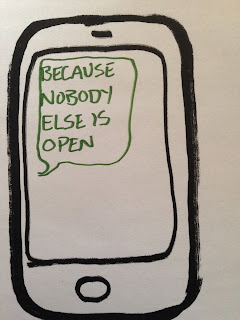 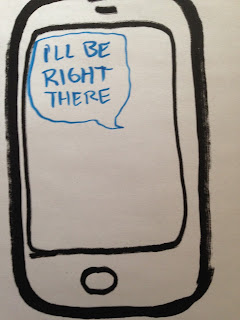 Fr. Pfeiffer, hearing the rectory bell ring over and over and over figured that I had forgotten my key (again) and came down to let me and Sebastian in.  Surprises of surprises, it was my friend from the bathroom wanting to know if we could call the police for him for them to take him somewhere.

We have been hearing a lot in the news recently of police not interacting well with non-typical citizenry.  Law suits abound and salacious headlines scream about the inadequacy of our police force.  Sometimes it is deserved.  Other times I think that we expect way too much - that a police officer should be familiar with every culture, all diseases, all psychological problems, all situations, and always get it right.

But I want to tell you about the two times the police came out to deal with our visitor to St. Sebastian.  I did expect them to come out and be a little stern, to be a bit authoritarian, and somewhat directive.  But both times (with different police officers each time) they treated this man who was dirty, smelly, and confused with the utmost respect and dignity - how I would hope to be treated if I were in this man's shoes.  They treated him even better than I did trying to get him out of the bathroom.  Both times they took charge of the situation and did their best to find a solution to his problems.  I was impressed and humbled by their Christian example of treating the least of our brothers.

Good news happens a lot more than bad news, but the bad news is magnified and made to seem like it's the norm.

Thanks for publicizing the good news.

That was really lovely.

Please Father, send this story to the Akron Beacon Journal
as a positive story about the Akron police department. When this story comes from you, people will believe it.

Hmmm.... sounds a lot like what we unreasonably expect of our priests, too:

"We expect way too much - that a [priest] should be familiar with every culture, all diseases, all psychological problems, all situations, and always get it right."