IN HONOR OF ST. PATRICK, HERE IS POST ON ST. JOSEPH AND A COMPLETELY UNRELATED ST. PATRICK DAY MEME 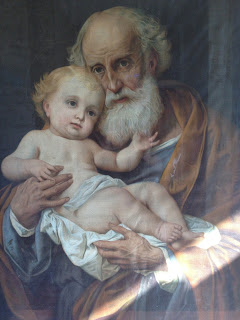 If you want to get Fr. Orndorff going (and it really doesn’t take much,) show him a picture of St. Joseph as an elderly man with grizzly beard and wrinkled face.  “That is not St. Joseph!” he is wont to declare in precise and slightly elevated tones.  Being the pastor of St. Joseph Parish I am inclined to give him some deference in the matter.

Father does have some backing for his claim that St. Joseph was not an old man.  The earliest depictions of St. Joseph show him to be a strong, young man of about 25 years of age, what you might picture if you thought of a man in his youthful prime, ready for marriage, and who worked at a very physical job.  In fact, the first three centuries of the life of the Church depicted him this way.  Then, all of a sudden, in the fourth century, he became an octogenarian.  (The painting to the right hangs at this parish and was a very generous donation.)

Did he enter a time machine and seem only gone for a moment but returned having lived a full and happy life in another time?  No.  There was a heresy afoot at the time that attacked the perpetual virginity of Mary, which made the claim that Joseph was the physical father of Jesus.  Having tamped down that heresy, artists (blessed artists! - thank you for all that you do for the Church) started depicting St. Joseph as an 80 year old man suggesting that man of such advanced years would not become a Dad.

There are two problems with this.  The first that I hear confessions and I know that being 80 does not necessarily have anything to do with a decreased desire or ability to do certain things that one did when he was twenty-five.  Secondly, it is a greater story, a more touching story, a more extraordinary inspiration, a more fitting idea (especially to this celibate) that St. Joseph was a man like any other man, in his prime, and having the same strong desires that any other man in that position would have.  Why?  Because it is a far greater thing to overcome your temptations that to have them simply taken away.  And now more than ever, that is the example we need with this great saint. 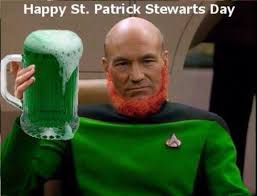 After all, what makes us great men and women is not that God would take away our free will and therefor out temptations.  What merit is there in that?  Would be becoming comatose for the rest of our lives be more virtuous than moving about and possibly sinning?  No.  What makes us great is, like St. Joseph, we become stronger than our temptations.
Posted by Fr. V at 8:34:00 AM

Hi, Fr. V. I think it would be more fair to say that Joseph wasn't particularly old, but he was old enough that people didn't consider him someone suited for a second marriage with a woman of childbearing age. If you look at the Protoevangelium of James (http://www.newadvent.org/fathers/0847.htm), the "infancy gospel" dated to around mid-second century, you'll see that there was a tradition of Joseph being a widower, of James being his stepbrother, and of Joseph being selected as husband for a consecrated virgin. Part of the conflict in this writing is that Joseph is not supposed to consummate this marriage but to take her in and care for her since she can no longer serve in the temple.

So he's probably not an octogenarian as you say, but he wouldn't necessarily be a young man.

By making Joseph out to be someone he isn't, I feel like you're also diminishing Mary, her ability to withhold and abstain, and the remarkable self control she possessed.

Look, I have a wife who has given birth twice. I know lots of women who have done it, some 5-6-7-8 times. Every one of them, without exception, describes it as "awesome" or "life enhancing" and motherhood is their ultimate calling and fulfills them in an incomprehensible wonderful way. Yet none of these amazing women that I know longs back for the morning sickness, the discomfort, the body changes, the daily grind of pregnancy itself.

Yet, here's a woman who upon being pregnant - who is no less human than any of us - upon discovering her pregnancy (and discovering the resulting discomfort and morning sickness and daily nausea that accompany it), embarked on a 10? 15? 20? 30? mile CAMEL RIDE to essentially work for her cousin who was further along than she was in the pregnancy. Then, months later, although it's not chronicled, one assumes she took a camel ride back.

I'm trying to figure out how many consecutive nights I'd be sleeping on the couch if four months into pregnancy I asked my wife to take a camel to Youngstown.

Jessica Tremblay said...
This comment has been removed by a blog administrator.
Monday, March 21, 2016