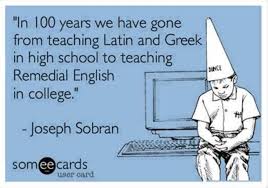 The Church has produced some of the most beautiful music in the world, not the least of which are Mass settings.  I grew up singing these Masses in Latin (yes, post Vatican II.)  We sang them at Church.  We sang them in public school.  We sang them at the University of Akron.  I sang them with a choir at an Episcopal church for their services.  About the only place they are controversial is at a Catholic Mass.  Oh, the irony.

There is at least one part where I get the reason why.  The Sanctus (Holy, holy, holy) is not to be done by the choir in complicated polyphonic form (in Latin or English.)  This prayer is part of the Eucharistic prayer.  Paragraph 79, subsection b, states that this acclamation is that, “by which the whole congregation (joins) with the heavenly powers.”  This makes sense because the first line of the acclamation is the song the seraphim (angles) sang in Isaiah 6:2,3: 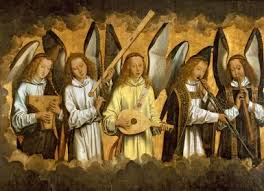 The second half of the song comes (appropriately enough for this weekend) from the people’s acclamation at Jesus’ triumphant entry into Jerusalem.  “Hosanna!”

It is part of the Eucharistic prayer.  The paragraph reads that the people join with the priest in it.  What we should understand is that the community of priests join with the ordained priest in this proclamation.  If you do not sing or recite this this part of the Eucharistic prayer (I don’t care how bad your voice is) you are shirking your responsibility as surely as the ordained priest would be if he decided he didn’t want to say part of the Mass assigned to him.
Posted by Fr. V at 6:56:00 AM

Jessica Tremblay said...
This comment has been removed by a blog administrator.
Monday, March 21, 2016