So, this past Friday night Sebastian and I went on a long, long walk around West Akron and we came across this scene:

A car lost control somehow, veered off of the road, and hit a lamp post. 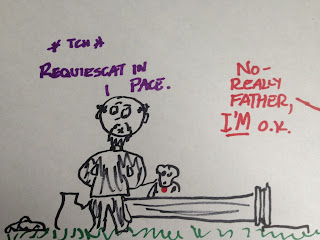 Our neighborhood has two different styles of lamp posts in them.  One may THINK that the differences are largely identified in the cartoon below: 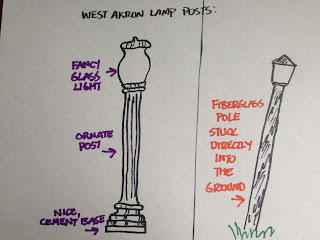 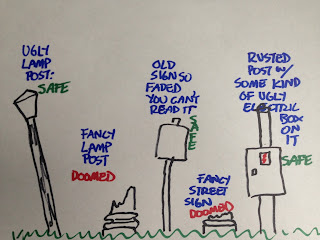 Yes, somehow through some metaphysical reality, cars are drawn like magnets to the fancy posts and are repulsed by the thought of scratching their paint jobs by bothering to hit anything that might be considered less aesthetically pleasing.  Seriously.  For a few years I was developing a theory that it might be some gang or cult initiation ceremony.  "Now, if you want to be a member, you must pass the final test.  Find a fancy lamppost and hit it with your car."  No kidding.  The Mull/Hawkins roundabout is nothing but a bunch of black nubs.

I was wondering why those beautiful posts were all little nubs and now I understand. It really took a lot of effort to take those out. Too bad. I guess beauty is in the eye of the beholder.

Murphy's Constant:
Matter will be damaged in direct proportion to its value