This may seem odd at first but give it a chance.  It is only 4 and half minutes.


St. Sebastian is one of the very few martyrs not pictured in they way he was martyred.  (He survived being shot with arrows, recovered, and then was clubbed to death by Emperor Diocletian.)

The earliest depictions of St. Sebastian was that of an older man with gray hair and beard.  It was only later that he grew progressively younger in art.

The United States Navy had a patrol ship named the U.S.S. Saint Sebastian in the early part of the 20th century. 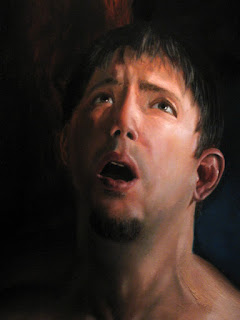 (This is a detail from a painting by Eric Armusik that hangs at St. Sebastian Parish, Akron)


In addition to being patron saint of athletes, soldiers, and archers, he has also been known as patron saint of pin makers, (have you ever known a pin maker?), book binders (only heard that once so . . . )   But several sources name him patron saint of those who are dying, police officers, and is one to invoke against plague and enemies of religion.
Posted by Fr. V at 6:22:00 AM

It's a tribute to how things can change so much in such a short period of time. During the Spanish-American War and WW1, when the U.S. Navy wasn't what it is now, we'd augment our Naval forces with private boats. The USS St. Sebastian was a private motorboat.... The US gets into the Great War, and boom - suddenly the private motorboat is a US Navy vessel. Mount a machine gun on there, and go serve the country.

Admittedly, it was never going to see heavy combat, and its job was probably mainly just making sure that the Germans didn't ship armaments to Mexico - but it's amusing to drive by the Portage Lakes and see pontoon boats on the water and imagine how they might do in a war.