SECRETS OF THE WALLS REVEALED!

If you want some insight into how the church has changed, look at the rectory and how it has evolved as a structure. It is particularly interesting to look at

old rectories from large (or once large) parishes. Typically it looked like this: There would be a large, well appointed suite. This of course would be occupied by the pastor in the day of the giants. There would also be a number of smaller, less grand suites and in some cases rooms more reminiscent of cells that would house parochial vicars. There would be other more typical rooms such as a “common room” where the priests might gather to recreate, a formal living room and dining room where more than likely the father pastor presided. And somewhere there may have been yet another suite where the person who took care of the house either lived or found refuge during a break.

Most interestingly the smallest amount of space was reserved for offices. If you were lucky there may have been three offices. One office, the most grand of them, would be the pastor’s. A second would belong to the lone secretary. If the parochial vicars were lucky they shared the last office if available. At least such was the case with many of the parishes in these parts.

Quite honestly not much more was needed. School was free. There were not a lot of employees. There was not quite as much transparency demanded. Finances were pretty straight forward. The pastor handled it. Quite often he counted the money and paid out the bills as needed. There was no need for a busine

ss manager and bookkeeper. One of the vicars or nuns was the equivalent of the youth director and did not need an office. And since school was free there was not a big call for PSR leaders (and hence DREs and such.) Technology was low (just TRY to find a plug in an old rectory!) If you were lucky there was a meeting room. But it worked. The walls of these grand old buildings tell great stories.

The needs of the modern parish have changed dramatically. With what is expected of parochial vicars these days, that they have their own office is quite necessary. There are many times more than one secretary owing to the increased workload on them, a business manager, a bookkeeper, a DRE, a youth director, and now with the advent of the permanent diaconate there is often needed a space for them. And these are just the basics. Many larger parishes have more personnel than these who also need space.

Retrofitting the modern need into an old rectory can sometimes be a challenge but I am glad so many pastors have met the challenge in preserving these sometimes grand buildings. Sometimes the results are better than others. My first assignment was not a great success in th 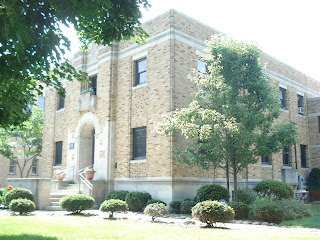 is department (though it was a great assignment that wouldn’t trade for the world!) The basement was all offices. The first floor had living space on one side of the hall (living room, dining room, kitchen) while the other side of the hall was offices that were occupied until 9PM. Upstairs remained the private rooms of the priests. This simply meant that there was no privacy unless you stayed in your room until late at night. Are you dressed for bed and remembered you left something downstairs or wanted a drink of water? That meant getting dressed. That’s when I fell in love with the cassock.

One of the greatest priests I know was my pastor then. There was only one time in seven years when Fr. Hilkert and I came to an impasse. He was going to have the guest suites upstairs turned into offices. Could imagine living in a place where on any given day just about anybody of any age or gender could be standing just outside your bedroom door? Fortunately he had a change of heart in the matter.

Oh, I suppose things could be worse. Many people do live like that and worse. The rectory in which I live now is of the old school. It is a fantastic structure and we make do. The old live-in suites are offices as are some of the old priest suites, storage rooms, and even the old living room has been transformed into an office though I hope to reclaim at least part of this last room. I wouldn’t trade this rectory for anything though. It is beautiful and full of history and stories. A few weekends ago a number of priests came to visit and as they sat around the dining room table and the room itself spurred tales of by gone days. There is a little door in the wall (that was covered when I arrived) that separated the dining room from the kitchen and priests and cook never crossed to the other side. Dinners were passed through the little butler’s door and one of the vicars would carry the plates to the table. Maybe some day I’ll chronicle some of the more interesting stories.

Thanks for your reflection on how things have changed. Apparently, the loss of vocations has even affected the structure of the rectory (more offices, fewer living spaces). The story about your current rectory was interesting, esp. for us history buffs. I'll bet that some of the older parishioners could enlighten us further about the history of daily life in the parish.

And having been there at St. Sebastian's, having seen what you're talking about makes it that much more interesting.

At my home parish, the rectory is a duplex across the street currently. What used to be the rectory and apparently originally a convent as well is now ALL offices. There might still be some suites there, but I think they're used for storage.

Where I work, the rectory is a house across the street. the offices where I now work was the priest's residence. I have no idea what it looked like at the time..hmm...must see if there are any archived photos anywhere!

Did you ever find a home for that huge church organ that you thought someday you would like to restore?

In a museum in PA!

hmm. just out of pure curiosity. shouldn't the church, rectory, church buildings, etc. change and adapt with our times? Shouldn't we progress as a religion and not regress (of course preserving our values and core beliefs at the same time)?

Cassock, eh.? Do you believe the church should regress back to the cassock era (pre-vatican II)?

That was the very point I was making unless I missunderstand what you are saying. The theme was that they ARE changing and it is simply interesting to read that change in the way buildings were intended and the way they are currently used. Was there another point you were trying to make?

Hope some of those stories are of kind pastors who helped to nurture their young associates.

Well. Yes it did answer my question... I have another one. Should the Church (not the building) change with our times? Should we move forward and change the mass, or keep it traditional and never change it?

That largely depends on what you mean. There are some things that are unchangeable. We cannot decide that we are going to consecrate beer and pretzels for a Tribe opening game Mass (being a little trite). That is simply not in our power to do. But there are other things that are very plyable. In fact before Vatican II there were changes made to the Mass. Saint Pius X added words to the Roman Canon that was thought untouchable. The Mass evolves, is evolving to meet the needs of her people within certain limitations. Whether I think it should or not is immaterial. It is a fact.

I had the blessing of being involved in the addition to the St. Vincent Rectory here in Akron a few years ago. It was interesting how the project evolved into an addition for the lay offices to address the privacy issues you addressed. It is interesting that you talk about listening to the walls because frequently that is how we refer to decisions about how to make modifications during renovations. If we listen the buildings and the people tell us what needs to be done.

I just got back from Michigan from the funeral of my Aunt. As people got up one after another and told stories about how she had a knack of showing up at just the right time with whatever you needed, it became apparent to all that the true gift here was listening. If we truly listen, whether it be to the walls or each other, God makes sure we have what we need.

You sound as though you would have a knack for preaching!