The last installment (for now) concernin 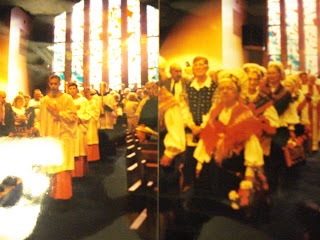 When a seminarian who is about to be ordained asks for some advice, one of the bits that I always give is, “Prepare you Mother. She has no idea what is going to hit her.” Right after the newly ordained, it is typically the newly ordained’s mother that receives the next amount of attention. Fortunately my Mom had other mothers of priests that warned her of the up and coming pandemonium and she was somewhat prepared and had for a number of years written letters to other mothers preparing them for the very public attention that they would receive.

Life changes for the newly ordained priest also. I had a cousin who understood this and so as an ordination present handed me a wrapped book with the mandate, “You are now going to be a very public figure. The only place where people won’t be telling you what to do is in your bedroom and in the kitchen. Learn to cook!” And she handed me a cookbook.

The next day after ordination was the First Mass of Thanksgiving. For our class this would take place on Pentecost Sunday. The Mass at which I would be celebrant was the last of the day and so we busily went about the tasks of preparing the church for the celebration. Priest friends arrived having found replacements at their parishes and seminarians and local boys acted as servers. Fr. Ireland, most recently of St. Gregory the Great and who is celebrating 25 years a priest this year was my MC.

Like the ordination itself, I only remember the Mass in bits and pieces. Listen to Fr. Kumse give the homily, receiving the gifts from my Mom and Sister, being awed that I was at the altar praying the Mass with brother priests behind me, being overwhelmed at holding the Body of Our Lord in my hands, walking out and smiling at the choir who sang a special Slovenian hymn for me. 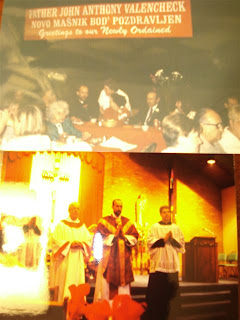 Fr. Ireland took me aside and said, “Well done. But in the future you do not give the final blessing ‘in the name of’ but simply say, ‘May Almighty God bless you, the Father, Son . . .”

There were then many more blessings and then finally over to the church hall for another dinner. The gym had been transformed into quite the hall and after the late afternoon dinner we headed back into the church for a Litany to Mary and benediction. It had been suggested that confessions then be offered but it was too late and I was too drained and so we headed home and went immediately to bed.

There were days of events yet to come including moving into the rooms that I would soon be occupying as parochial vicar at Saint Ambrose. But as wonderful as that weekend was, it does not compare to waking up every morning loving what I am doing as a priest of Jesus Christ.
Posted by Fr. V at 5:37:00 PM

Fr. V., I can say this especially now, having met you, but it's OBVIOUS that you love being a priest, and that's an inspiration to all of us.

I agree you give me hope