TUESDAY QUOTE OF THE WEEK - LXXVI

FINDING TRUTH WHEREVER IT MAY BE FOUND: “As recently as the 1920s, silence was the ‘context of thought, conversation, and general

existence,’ notes Joseph Urgo, author of In the Age of Distraction. Now this space is “colonized,” he writes. A realm of silence is as rare as a virgin forest and, to many of us, as eerie, ‘Inundated by perspectives, by lateral vistas of information that stretch in every direction, we no longer accept the possibility of assembling a complete picture,’ asserts literary critic Sven Birkerts. ‘We are experiencing in our time a loss of depth – a loss, that is, of the very paradigm of depth.’” From Maggie Jackson’s, “Distracted: The Erosion of Attention and the Coming Dark Age”

“Jeepers!” cries Jay, “It’s time for Catholic Carnival 183!”
Saint Sebastian celebrates its 80 anniversary this weekend! If you are in the area come help celebrate at the 11:00 Mass.
The Diocese of Cleveland Enewsletter asks, "Did you know that the National Catholic College Admission Association is a non-profit organization of Catholic colleges and universities committed to promoting the value of Catholic higher education and serving students in the transition to college?"
Wow! Borremeo Seminary, the minor seminary in the Diocese of Cleveland has a new web site and it is pretty sharp. View it here. Thank P for sending it along! 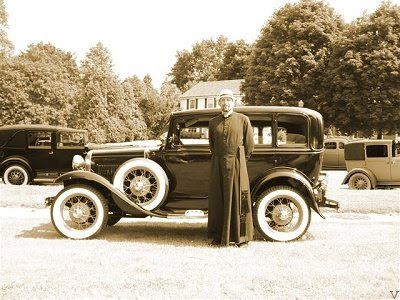 The ever talented and prolific Vincenzo posted this picture on his site with the caption, "Some thought that he went a bit too far, but after only one month on the job, everyone agreed that Father Valencheck had successfully eliminated all traces of the heresy of modernism from the parking lot..."

And I do love that photo of you with the car. (the original and this one both)

Well, coming from a mixture of Irish and even shorter French Canadians, I'm always impressed enough with anyone who can look across the top of a car..any car.. but this vehicle is a mammoth, like its visiting priest. Cool photo.

That's great. When I saw the original I thought, it's too bad that you can see modern cars in the background. I thought it would be a perfect picture if the modern cars were not in view. I never thought of replacing them! Love both pictures.

I love that picture--Vincenzo rocks!