Do you know how it is when you have unexpected guests pop by and you have to drop everything and take care of them? That happened this past week at Mass. There was an unexpected guest that flew in and made a nuisance of himself most of Sunday. He showed up at the 9:00 AM and stuck around for most of the day. At first I wasn’t sure what he was – a large bug? A bat? “Great,” I thought, “The kids will be screaming through the whole Mass.” 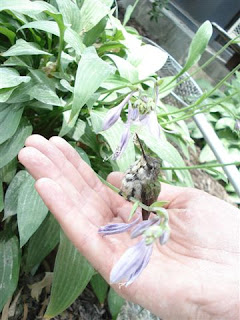 As it turned out, it was a hummingbird. The air conditioning was out for the first Mass and so we had the doors flung open which was a great invitation for any critter to walk, crawl, or fly in. This little guy zoomed in never seemed to take much of a break soaring over our heads. During the homily at the 11:00 he decided to fly down to the flower arrangement right in front of the ambo and feed on the flowers there. Actually he was quite neat to see and as it seemed he was much more interesting than I was even I stopped to have a look and admire this cool creation of God.

Mass was over and Ed, one of our weekend guys, left the doors open hoping that the little fella would get the hint and go outside, but he was determined to stay indoors it seemed. Finally he flew into a window and Ed was able to scoop him up in an usher’s basket. 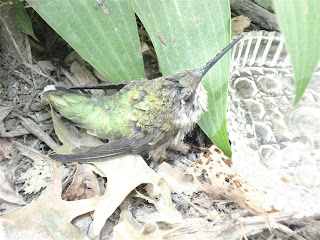 The poor little guy was pretty out of it and he had to have been hungry and dehydrated from spending so much time in church without much more than what he could glean from the flower arrangements. So Ed stopped by the rectory to find out if anybody might know what a humming bird eats. As it turns out my sister likes to keep hummingbird feeders about and makes her own food which largely consists of boiled sugar water. So we made up a batch and tried to feed it to the distressed bird who seemed to lap it up quite greedily. But it was obvious his body was still not working in a coordinated fashion. 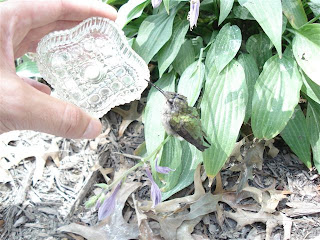 Ed was a good physician but we were getting worried. How much longer could the bird hang on like this? Everything seemed intact and working, just not in the way it was supposed to. We could take it in our hand and hold it up to a blossom and it would feed. Then finally it took a few coordinated flaps of its wings and landed on a low branch where we fed it more sugar water.

Running low on sugar and water, Ed ran in to get more and came out just in time to see the little bugger take flight, make a circle around us once and then fly high and land on the side of the building. At that point we left hoping that it would start taking nourishment from the many flowers by the school if we were not there to make it any more nervous. 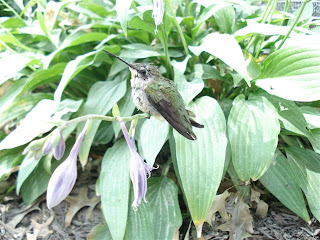 Now, if there are any bird enthusiasts out there who want to tell me, “Oh, it probably didn’t make it,” I don’t want to hear about it. Ed and I are pretty happy thinking that it made its way back its average bird life.

Not a very profound diary entry, but it was pretty cool. It is not often that people get to spend such intimate time with one of these zippy little creatures.
Posted by Fr. V at 6:50:00 PM

Very cool. It looks like you have a little female there, or perhaps an immature bird.

Adult males are brightly colored around the head and/or throat, usually with shades of red or purple, dependent upon the species.

I was trying to ID the species, but the pics don't enlarge on my browser.

Aww...that is SO COOL that you got to feed a hummingbird...up close and personal!

Thanks for this lovely story. I'm sorry I did not see the bird in church. I was reminded of the poem by Emily Dickinson.

If I Can Stop One Heart from Breaking

The kids will be glad to hear that the bird made it outside. My daughter was quite concerned that after everyone left the church, it would get lonely!

What a cool story. I for one, think the little guy/girl probably made it. Here's hoping anyway!

My guess is she is fine. We have lots of hummingbirds around here. They are a marvelous little creature.

I'm sure its ok. They are resilient little critters. It pobably was just basking in the attention. "Cool, I can eat sitting down for a change!" You may have opened a hummingbird cafe.

Fr. V. ...........We were right up in the front pews and were delighted by the little hummingbird in front of you but I do want to tell you that that was one of the best homilies so far, thank you, very inspiring!

Hi Fr. V.....what amazing little birds they are! I love watching them at feeders and I'm sure your little one made it just fine. Maybe he'll come back again to visit!

Hummingbirds are GREAT! They're cute and elusive and not many get to hold those sweet creatures in their hands or even feed them by hand!

The readings SHOULD have been about (is is Matthew?) how a sparrow (or hummingbird) doesn't fall without God's knowing....

Yes, adoro, and since He is aware of the least of His creations, I'm of the opinion that He knew the little guy wasn't doing so well and thus directed him into the Mass, so as to ultimately end up with the life-saving care needed.
;-)