TRYING TO ANSWER THE QUESTION, “WHAT DOES A PRIEST DO?” Wednesday morning they clean the offices at the rectory making accomplishing anything significant difficult and so the morning is used as the time to visit people in the hospital. 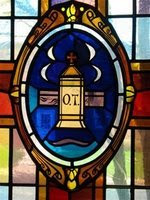 ish and I roam about the sprawling and growing complex checking up on people, visiting, and blessing and anointing when it is needed. Let’s be very clear. I used to hate this. I felt uncomfortable, intrusive, awkward, and completely unqualified. It began with a bad experience when I was in the seminary. They sent us into a hospital and told us to go talk to people. I went into a room where, unbeknownst to me, a lady just had surgery for “lady problems” and was angry – particularly at men – particularly men in hospitals. I didn’t get much past, “Hello, my name is . . .” when she started screaming for me to get out.

That was the only incident but it made going to the hospital for me a painful weekly experience. Now it is not so bad because of the relief it brings to so many people on many different levels. A distracting visit, the surety of the sacraments, the comfort of prayer, and a symbol of hope in a difficult situation.

This past Wednesday I was in part of the hospital that was devoted to people who have memory problems like my father. The people here may have no idea who I am but they light up at the sight of a collar. People who cannot carry on a conversation click “on” and join in prayer as if there were little wrong with them, their faces relaxing in this moment of peace amidst the chaos of illness.

The day before (Tuesday, my day away) I went to visit my Dad. I was wondering if this was the time to tal

k about death. It wasn’t, most definitely. “Ask him if he thought about praying instead,” was a question that rang in my ear. So I did. In his most gruff manner he said, “I don’t even know how.” “Just ask him to help you Dad.” “Fine!” he groused, “God help me!”

Well, it was start.

Often the priest is the only one who broaches such important topics with people as death and the state of one’s soul. Everyone else is too polite and does not want to risk depressing a dying person. But can you imagine the most important thing in one’s life is about to take place and nobody wants to talk about it?

As I was leaving the hospital on Wednesday a lady stopped me and asked me if I was Catholic. “Would you talk to my husband?” Apparently he was in much the same situation as my Dad. “He is not completely coherent, does not believe in God, and is slipping away. Would you offer to talk to him or pray with him?” Of course I wouldn’t mind.

I offered him a blessing or a prayer and he waved me off. So I wished him a good day and left him while thoughts of that woman who did not want me in her room so long ago circled around in my mind (which is why I do not go into any room without an invitation.) But I thought of him for some time (which was probably why that clip from yesterday infected my thoughts so.)

gitimate reasons why he might not want to see a priest, but she felt so frustrated for what else could she give? She can provide company but not hope. She can say goodbye but not see you later dear. She can say thanks but not pray with him for his good reward. Company, hope, goodbye, see you later, thanks, your sins are forgiven, these are the things I want to hear on my death bed and why I go back to the hospital every Wednesday.
Posted by Fr. V at 5:24:00 AM

I think this is why we have Divine Mercy; for those so obstinant, it is a defense for them and maybe a comfort for those whose loved ones just refuse to convert, even a little. The promises Jesus gave to St. Faustina in this regard are powerful, and He told her the importance of praying the chaplet for those close to death.

But of course, the chaplet still can't replace the sacraments, although it does open the door to hope.


Now that you've been a priest for awhile, my guess is that you have occasion to visit people with whom you are well acquainted, maybe even call friends. Is it easier to visit them in the hospital, or more difficult than someone you may not know well?

I'm sure you hear this enough, but thanks for visiting people in the hospital.

I'll say it again: Thank you!

When my newborn spent months in the hospital, the only spiritual care we got was from a wonderful Lutheran woman. She didn't care that we were Catholic and we didn't care she was Lutheran. We were all there for my daughter. But I really wish the local priests had been around for more than the emergency baptism and the anointing. The sacraments are important, but feeling like others care is too.

Aw.. what pain there is some days. I am glad to have the reminder to pray for your dad, and for his loved ones who love him so.

DEATH is really no big deal, its just a natrual part of life, the only people who seem to be concered about it is the living

Father: God bless you for your ministry.

Great post. I read a book of reflections for the Easter season,on the weekday Gospels that I got from our parish called "The Little White Book". In todays (Tues.) it says: When our life on earth is coming to an end it won't be fine cuisine that we cherish, but the food that lasts forever.
How very true.

Sattvic, you are right. Death is natural. Dying is natural. But then again so is a tooth ache or giving birth, but that doesn't mean that someone won't find it painful, confusing, and/or scary. And if death is only natural, then it doesn't have a whole lot of meaning and absolutely no hope. Some people are Okay with that. I'm not. And I am convinced that that is not the case that life is only of this world.

Awefully good to hear from you.

I pray for you every day. Your visit to the hospital is very good - people need that so much - even the ones who wave you away.

Thank you and may God bless you for this difficult ministry, Father!

My family still talks about a good priest who came to the hospital in the middle of the night when my grandmother died. He got off his sickbed because he was awake and his brother priest (who was on call) was asleep, and he came to us. Nanna had already passed by the time he arrived, but Father stayed to pray with us and for her soul! It means so much to have a priest who cares at such a time.

I know it must be awkward and painful for you sometimes, but you are truly doing God's work for His people!