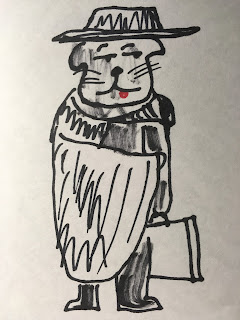 There is a new face in the St. Sebastian rectory.  His name is Archer.  (Get it?)  He is a black lab mix rescue just like Sebastian.  He is on a two week interview to see if he will work out.  Sebastian is going to be 11 this year and it seemed time to have a trainee come in and learn the ropes.

So far he gets along with dogs, children and adults.  He doesn't bark much.  He respects the house rules.  He and Sebastian are getting along.  The staff seems to love him.  The only thing so far is - he's a sneak pooper.

Not so Sebastian.  Everybody can tell when Sebastian is about to do his duty.  He has tell tale signs that go on forever as though he wants the world to know the creation he is about to unveil to the world. 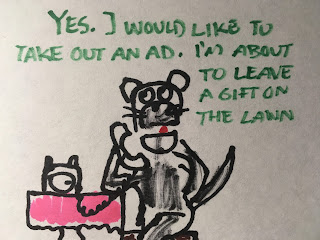 First he takes a funny turn away from the direction we are walking.  Zig zags a couple of times.  And when he finds a tuft of grass (it's aways the same type of landscape - so much so that if you miss him creating, you'll find it by looking at the topography) Then he walks a little more - his hind legs spreading further apart with each step and then, finally, he slooooowly squats like a dainty elephant trying to sit on a small stool and remains that way long enough to read half a page of comics.

Not so Archer!  Most of the time there is no warning.  As he is trotting along it might just squirt out with no warning.  You might miss it but I guarantee you the passing car won't.  From time to time he likes to display his creations on pedestals.  If I didn't see it I wouldn't have believed it.  The other day he backed up against the base of one of the light poles and left a perfect specimen sitting on the elevated cement platform on to which the pole is bolted.  I'm glad I saw it happen because if I hadn't and saw it later I would have though someone was playing a not so funny prank on us.

What in his background before he was found brought about this behavior???  Oh well. 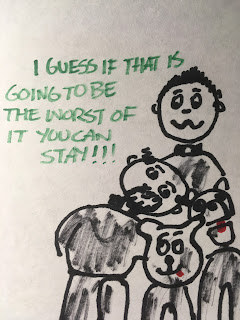 Is he Archer because of St. Sebastian's 1st martyrdom or are you a fan of the cartoon?

HAHA! I trained my dog to poop directly on the pooper scooper shovel so I wouldn't have to pick it out of the grass. We would walk through the grass, he would look for the shovel, and then do his business. We would flush it down the toilet, wash the shovel, and put it away for later use. When I moved back to Akron, hubs couldn't figure out why the dog was whining when he went outside. I had to tell him to hold the shovel so he could go! The dog finally learned to poop in the grass like other dogs do, but it was pretty funny. I can't wait to meet Archer!!

Named because of St. Sebastian KNOWING that people would say, "Like the cartoon?" giving him a chance to allow me to do some ministry. "Let me tell you about St. Sebastian . . . "