The further progress of the crusade is not found in the parish archives, but the results may be witnessed by the impressive rectory which stands to this day.  The mission revival building remains much as it did when it was constructed in 1938 on the 10th anniversary of the founding of the parish though the second story on the west wing, over the garages, is a later addition.

The rectory contained three modest sized suites for priests which consisted of a small sitting room, bedroom and bathroom.  The pastor’s suite was march larger, grander, and more in keeping with the building’s mission revival architecture.  There was also a “Jack and Jill” set of rooms for guests.  Two more bedrooms on the first floor were intended for live in help, a situation that was not at all uncommon in rectories at the time.  This was largely owing to the lack of social security and widows seeking a place to live and to have a source of income. 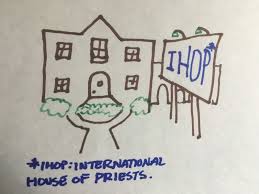 The house was set up so that those in the service corridor would not have to pass into the main part of the house and visa versa.  To this day it is difficult to go from the front rooms of the house into the back of the house at night as there are no light switches located by doors heading in this direction as no-one was supposed to pass that way.  A little door is located in what used to be the small dining room through which meals would be passed.  There was a floor buzzer (no longer in existence) that would announce to the kitchen when a course was finished.

The house only contained three offices which suited a parish of the 1930’s.  There was one large office for the pastor, one for the secretary, and a final office which the parochial vicars would share.  This would only become a problem later when a typical parish would have many more employees.
Posted by Fr. V at 11:28:00 AM