TUESDAY QUOTE OF THE WEEK CDLXIX

FINDING TRUTH WHEREVER IT MAY BE FOUND:  “America is the only nation in the world that is founded on a creed. That creed is set forth with dogmatic and even theological lucidity in the Declaration of Independence; perhaps the only piece of practical politics that is also theoretical politics and also great literature. It enunciates that all men are equal in their claim to justice, that governments exist to give them that justice, and that their authority is for that reason just. It certainly does condemn anarchism, and it does also by inference condemn atheism, since it clearly names the Creator as the ultimate authority from whom these equal rights are derived."  from G. K. Chesterton's, "What I Saw in America"

I was in New York visiting recently.  My sister took this picture of me and sent it me yesterday.  What   great day! 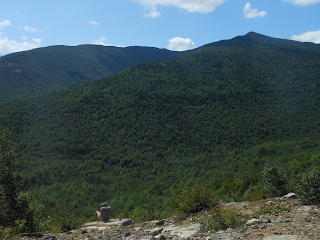 Gifts that nailed it: 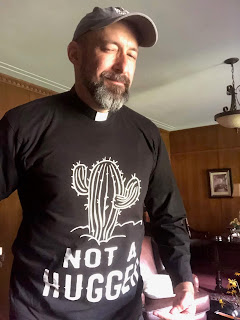 Last Theology on the Rocks.  Great crowd!  I think the new venue is a winner.  Great job Fr. Jordan. 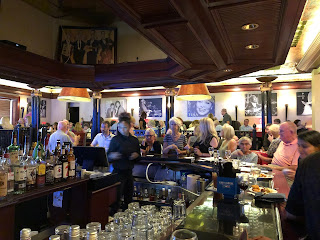 As Perkins comes down I think of all my old schools that have disappeared.  Old architecture slowly fading away.  Thank goodness we take such good care of our 90 year old St. Sebastian. 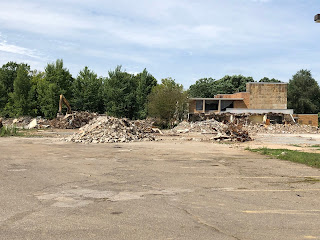 Apparently we are a chiropractic school now. 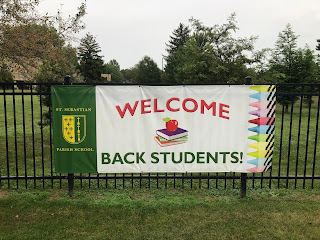 MONDAY DIARY: ALMOST EXCRUCIATINGLY TRUE STORIES: IT'S ALL A MATTER OF PERSPECTIVE 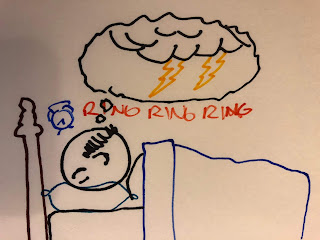 So, Saturday was my birthday and I did not wake up a happy camper.  It's not that I don't like birthdays.  It was that this was going to be a killer day on top of being a birthday.  It was a perfect storm of events that made the day tight and busy.  Between Fr. Anthony and me we had three weddings, two Masses, one funeral, confessions and house guests.  As a confirmed and deep introvert, the day just seemed as though it was going to grind me down into dust. 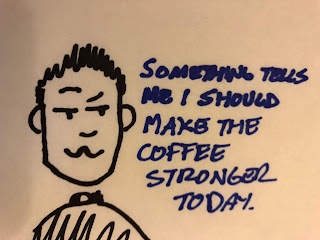 But as the day went on and things got done, the sun seemed to shine brighter, the air seemed cleaner, the tasks seemed more doable and the people were great.  I even made a new friend that day so there was that.  But still I had to ask . . . 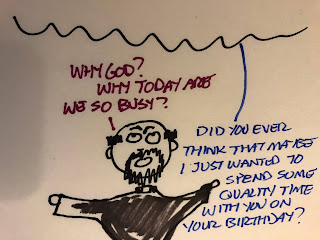 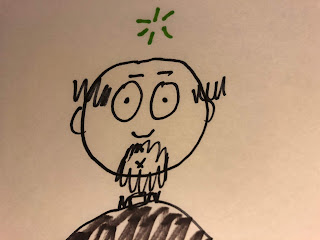 No kidding.  It was as clear as a locution could be.  And once I heard that it turned out to be one of the best birthdays ever.  Thank you God.
Posted by Fr. V at 8:18:00 AM 3 comments: 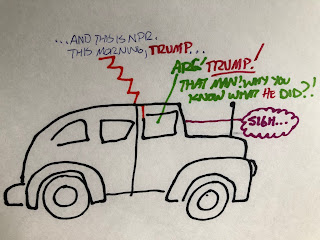 This is not a post about President Trump - it is about his name.  Say what you will about him good or ill, one can't deny that the mere mention of his name will bring about a strong reaction.  And typically a lengthy one at that.  It's like a popular song - whether you like it or not - of which you only need to hear a scrap of it and it plays in your head all day long.  Except, instead of playing in your head, all one needs is to hear the name "Trump" and someone else will go off all day long. 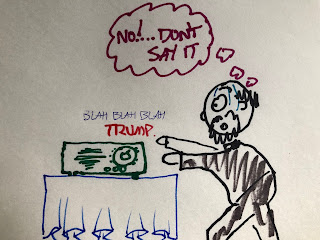 I get that people are passionate about the president - so much so that no calm discussion can be had about him.  Listen to the radio, open the paper, read a Facebook feed etc., and there will be a steady diet of news about him more than about anybody else I can remember.

Recently I was with a group of people who were not shy about their extreme dissatisfaction with our president.  Every time his name was mentioned, even by an otherwise ignored radio, the room would burst into an uproar.  There were so many things about which to talk - sports, art, what taco stand is the best - but it all went on hold for ten minutes to focus on someone they agreed numerous times that they disliked.  I'm even wary of writing this that someone out there will assume my position on the president and rake me over the coals for it - or are perhaps just angry that I associated his name with this comic.

One day I broke away to go for a walk and came across this piece of lawn art: 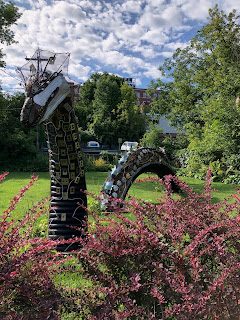 As I was preparing to take a picture of it, a man rode up behind me in his automated wheelchair and started asking me questions.  "What is it?  Is it a giraffe?  Isn't too big?"  As he was riding away I saw the sign on the back of his chair: 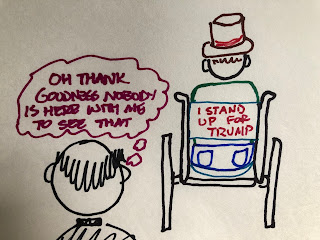 I decided not even to bring the sighting up as funny and ironic as it should have been whether you like him or not.

It's not that there are not things about which just about anybody could complain.  And it is good to get it out there.  But isn't there a point when it is not being productive any longer? 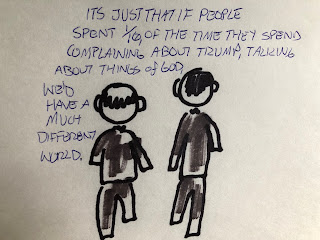