to be celebrated by
His Excellency
The Most Reverend Richard G. Lennon
and the
Dedicatory Concert
to be presented by
Mrs. Lynn Frey-Steward
on
Sunday, the eighteenth of November
two thousand and twelve
at half past three in the afternoon
at

Pipe organs in some form have been around since well before the time of Christ and had been a favorite instrument of emperors and kings.  For centuries, in one form another, the pipe organ has been married (as it were) to the Church and her worship.  According to the Second Vatican Council document “Musicam Sacrum” paragraph 62, “The pipe organ is to be held in high esteem in the Latin Church, since it is its traditional instrument, the sound of which can add a wonderful splendor to the Church's ceremonies and powerfully lift up men's minds to God and higher things.” 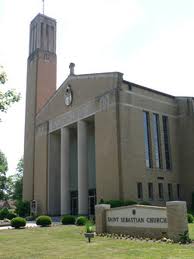 Until the advent of the computer, the pipe organ was the most complicated and advanced piece of technology in the world.  With this one instrument, a single musician can replace a whole orchestra and fill a space with sound that just is not possible with a piano (unless a microphone is used.)  It can speak softly to accompany soloist or it can take on the force of mighty orchestra and full tilt.  It can produce different sounds from flutes to strings to trumpets.  It is a marvel of ingenuity, beauty, artistry, and history.

The St. Sebastian organ made by the Schantz Organ Company will consist of 2,683 pipes.  There are 44 ranks of pipes.  (A rank is a set of pipes usually consisting of 61 pipes.)  There will be four divisions, the Great organ, the Swell organ, Positiv organ, the Choir organ, as well as the pedal division.  The new organ will have two division exposed to the congregation, which is new.  Previously the entire organ was contained behind a screen.
I hope that you are able to join the parish for thisimportant event.  It is free and open tothe public.  The address of the parish is476 Mull Avenue.
Posted by Fr. V at 12:02:00 PM

Was this fiscally responsible? We are spending money at this parish like drunken sailors. We all want the cadillac or porsche. Most of us make do with the focus or similar brands. An electric organ would have made more sense. 500,000 could be used to offset tuition, and the sounds of Catholic school children singing God's praises will always sound more beautiful to us than any human made instrument.

If we can afford this organ, we can afford to keep tuition the same for next year. Please, please let's maintain our priorities and realize that MOST families in Northeast Ohio have not had an increase in salaries in years, and most have seen their health care costs skyrocket.

Yes. I do think we are keeping with our mission as Church as well as education and etc. The poor need beauty too. The poor need beautiful places to go too. The children need to be exposed to true instruments and music too. Children;s voices are the most beautiful - but the music they sing is man made (and paid for) and the musicians, and the heat and the building and I believe they and the whole community deserve the best we can offer them.

School tuition has only gone up a fraction over the past four years. We are one of the best bargains around. If we can afford to give God the best we have to offer Him in our praise and art, why not do it?

There will always be those who say do not do anything of quality and give the money to the poor. "Sell the Vatican and give the riches to the poor" is a common enough cry and has some legitimacy to it. But then all is lost - there is nothing to hand on - our heritage is gone - and the resources that could still be benefiting mankind, bringing inspiritation, beauty, encouraging them to partripate in taking care of the poor - all the wonderful things you call for us to do would simply be gone.

"Why was this perfume not sold and the money given to the poor?" One would have expected Jesus to say, "Great idea!" to Judas' question . . . but He didn't.

So, we have to deal with this mystery, trying to hold in dynamic tension both the poor and the spending of our resources for the praise of God.

Maybe beauty and music will lift our hearts. We still have to be financially responsible.

Sellig paintings does have some merit. As far as tuition going up a fraction, yes, true, but even then when salaries have not gone up, the cost of living has, health care is not affordable, then that fraction is dear indeed.

But the half million has been committed to this project. Let's move forward and hope for the best. It may be the best half million dollars the church has ever spent, and it certainly does create a sense of honor and heritage when so many other churches must close their doors due to financial constraints and a lack of priests. We're very fortunate that a small minority can afford this luxury and the rest of us may appreciate the beauty provided.

I thought the organ dedication and concert today was very well done! Thanks for your commitment to sacred music, and for making sure it is available for generations to come.

Father- the concert today was really wonderful! I was amazed at how many people were there - it is obvious that your support for the project has really paid off! Keep it up!

You know what,
My answer was snarky and I apologize. I beleive in what I said but it was not said with enough love.

Things are rough out there and some might wish the money spent in this way would have been spent in other ways. But it is also making the assumption that the $500,000 would have been there to do something else with if we had not had the organ project going - This was over and above - the $ that came in from non-parishioners, from non-Catholics, from foundations, and even much of what was given by parishioners simply would not have existed and we would not have a great istrument.

In truth there is rarely a right time to do such a project. The great edifaces of the turn of the last century were sacrifices of the immegrants that built them. They certainly were not in salad days with money to spare. But thank God that they did.


Yesterday's dedication and concert was nothing short of inspiring. As a former parishioner who now wishes I could bi-locate every Sunday, I have followed the story of the organ on your blog over the months, and I'm so grateful that I could be there to see the culmination of all those months of difficult discernment and fund-raising, etc. There is so much I could say.

I could talk about how this significant expense is not making anyone rich, but is rather going to provide a modest living to dedicated artists and craftsmen who, thanks to St. Sebastian, are now in a better position to continue to use their skills to perpetuate continued access to fine sacred music for future generations

I could talk about how this organ project is an example of recycling on a glorious scale. I had the pleasure, yesterday, of meeting a member of Trinity Lutheran. She was showing a photo of her old church to anyone who cared to look, sad to have it closed, but blessed to see its music live on in another place of worship. St. Sebastian's investment may be like buying a Cadillac, but buying it thriftily, like getting it used for half price from an elderly old lady who could no longer drive, but wanted it to have a good home.

What I'd really like to focus on, though, is the inestimable gift of beauty that St. Sebastian parish, under your visionary leadership, is offering to the parish, the community, and the diocese. You simply cannot put a price tag on the heart-drawing, transformative power of beauty, given that the source of all beauty is Beauty Himself. For me, the greatest evidence of the existence of God and of His nature is the ability with which he has endowed man to serve as His "sub-creators" (JRR. Tolkein in his poem Mythopoeia). God so designed our minds, bodies, and spirits, such that the artists among us can take the raw materials He has given us, and produce original works of breathtaking complexity and beauty.

Really, all that any car can do is get one from point A to point B. But the music that this pipe organ will provide in the context of the Sacred Liturgy will offer receptive souls the opportunity to soar above the cares of the world, to a place just this side of the thin veil between heaven and earth, lost in a loving encounter with the Lord of Universe. Beautiful, top-quality, sacred music does that, perhaps even, at times, sweeping up even the unreceptive soul by surprise. I am thankful that there are at least a few places left, like St. Sebastian, where we can worship with music of such excellence that it serves as wings for our souls.

My hopes and prayers for St. Sebastian come from the words of that most well-chosen song we sang yesterday during the dedication concert: "When In Our Music God is Glorified." When you can offer music of perhaps the finest quality in the diocese, it could be all too easy to become ostentatious. Gorgeous sacred music, not prayed, but merely performed, rings hollow. But a humble recognition of our nothingness before the One from Whom comes the funds and the instrument and the talents "leaves no room for pride." There is nothing left to do but let that fine music be an act of adoration. Might that great beauty which you are so privileged to be able to produce move your hearts and those of all who worship with you "to a more profound Alleluia!"