Following the 11:00 o’clock Mass when just a 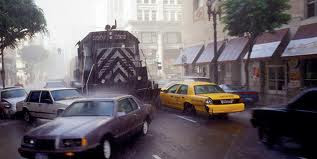 couple of dozen people were left in the church there was a loud rumbling noise as if a snow plow truck was running right up along the side of the building, or a train was passing by on some long forgotten tracks. There was a momentary blocking of the sun followed by a louder crash that shook the whole building!

Everyone just froze in their tracks like the prey of hawk that is shocked still at the screeching of that mighty bird before it strikes. And then it just stopped. After a moment I realized that all of the snow that used to be on the west side of the upper roof was now on the lower roof. Tons of snow came crashing down a couple of stories, landed with a shuddering impact that rocked the building. “Don’t worry,” I called out, “It’s just the end of the world.” 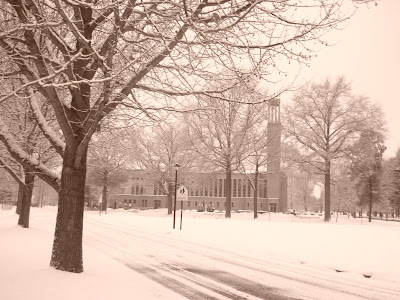 Going outside people half way down the block had turned to see the sight. “That was loud!” they called up the street, “What a sight!” I just hope there wasn’t any damage.

Even though the Super Bowel was a great game (that is, if you were looking for a good game and didn’t really care who won) this event stands out in my mind as far more exciting – although the bratwurst wrapped in bacon comes a mighty close second.

Also this weekend we had our St. Sebastian confirmation retreat. What an awesome group of kids there are here. I much enjoyed talking to them. On Friday night we had a penance service and called for help from a couple of local pastor. Afterwards we repaired to the rectory for refreshments and talk. It was a nice night with no agenda or project to accomplish. I treasure those moments with fellow priests.

s baby priest we heard extensively about the “good old days” when priests used to get together all the time and have great socials; Forty Hours of Devotion being one of the focal points of the gatherings. They would lament to us that our generation of priests don’t seem to get together as often to blow off steam.

It is true. In general we do not. But also gone are the days of three or four priests in a rectory when your duties could easily be covered. Less priests + more responsibilities = less socializing. Especially if means what was skipped on Monday just doubles the work on Tuesday.

Oh! Woe is priests? Nah. It is just a different time. We do get together though most of the time not quite as spectacularly as in the good old days – or at least not as often. And being rath

er the recluse anyway I rather enjoy my solitude when there is the opportunity to carve it out of the schedule.

One of the pastors this past Friday pointed out that I was rather the talk at his place for letting the staff go home on Wednesday because of the snow storm. “I have a confession to make,” I said to him, “It wasn’t so much for their safety. It was my day away and I decided not to go out and sent them home so I could have the house to myself, play my music, and walk around in my sweat pants.”

also, you could drop a mack truck on the low side aisle roofs of the church and it wouldn't bust thru

Not quite as exciting as the transformer falling over at St. Ambrose during the Sunday Masses , huh?

what's this about St Ambrose? Tell us more.

I just recently discovered your blog. LOVE it!