Our secretary had an egg for lunch the other day.

“Did you hear the good news?” she asked, “Science 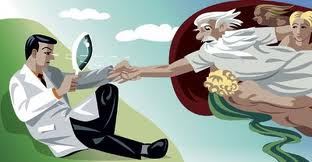 now says that we can have an egg a day!”

What you are about to read may sound like a rip on science but it is not. It is just brought up in order to make a point.

Because of science my Mother started buying oleo because science said it was better for you. Later they said it was not. In fact, it was one of the worst dietary things you could put in your body.

The eleven glasses of water we were supposed to drink a day? It could potentially kill you.

The various predictions of the end of the world in our time due to over population and lack of food – well, I’m still here. And my computer is still working after Y2K to boot.

Diet pop may now harm you BUT we should start drinking wine and eating dark chocolate now.

The food pyramid that we learned in grade school is gone replaced by something else. 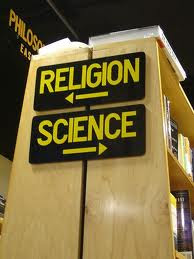 Now if you were to present these ideas (and many more) to a scientist and say, “This is why I am having difficulties giving myself over completely to science,” he might reply, “You have to understand what is going on. Sometimes there is just bad science going on by scientists who are not so good. Sometimes companies manipulate science in order to sell things such as the tobacco industry hiring scientists to say that there was no scientific evidence that smoking was bad for your health. There are fads in science also that just need to work through and get out such “quality time” with your kids being even better than just wasting time with your kids. It does not diminish true science however. True science brings us to truth and benefits all of humankind. It was faulty science that said we would all be well into starving by now but it was also science that prevented us from starving.”

But now reverse it. Imagine a scientist pointing out all of the damage that people have done in the name of religion. It would be just as easy if not easier to come up with a list. We might say to him, “You have to understand what is going on. Sometimes there are just bad Christians preaching religion that is not so good. Sometimes pastors will manipulate people with religion to get you to donate money to expand their ministry. There are fads in religion that just need to work through and get out such as felt banners. It does not diminish religion however. True faith brings us to truth and be 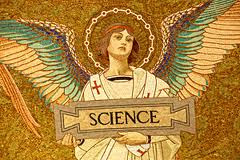 nefits all of humankind. It was faulty religion that predicted the end of the world at various times but it was also religion that helped see people through those times.

Science and religion both have their public tasks cut out for them though science seems to have an upper hand in public relations at the moment. But it should always be that: Science AND religion working at their best to bring us to truth – and this is one of the things that I love about the Catholic Church that it does respect science as much as it does.
Posted by Fr. V at 6:27:00 AM

that's a nice image of the science angel . . . where did you get it?

please don't use that word 'manipulate' any more . . . .
I feel manipulated enough already

God has not allowed Science to find out all the secrets of the universe yet. So, some people discredit religion when it seems to contradict science. Then, we hear about "the Big Bang Theory" and wonder if Genesis Chapter One was trying to tell ancient peoples about the origin of the universe in parable form. Or we are taught that we all descended from Adam and Eve. How quaint. Until modern genetics proves that the human race did descend from one particular couple. Science eventually does catch up with God.

It's just a stock photo.

Out here in dairyland, oleo used to be restricted; due to the dairy lobby, food coloring was included as a separate yellow pellet and you had to bring your oleo to room temperature and stir in the coloring. My grandpa sold insurance out west and my grandparents bootlegged a case of oleo for my mom at one point.

You left out some important information; is the wine and dark chocolate supposed to replace fast food or pizza?