Last week, you may remember, there was no post on 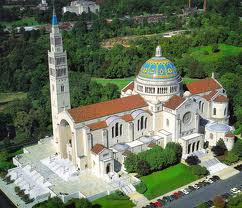 Tuesday owing to my road trip to Washington D. C. in order to see Cleveland priest Neal Buckon become ordained auxiliary bishop for the Arch Diocese of the Military for the United States. Bright and early I got up and packed the car, celebrated Mass and started off to meet two other Cleveland area priests for the ride east.

Two minutes outside of Akron I hit 3mph highway driving. Something happened. As it turns out what was supposed to be a fifteen minute jaunt to our meeting spot turned into a one hour crawl. The worst part (or maybe the best part) was when I finally got to the front there was nothing to see – no evidence of why there should have been a jam. Such is life and thank goodness for cell phones.

We finally met up and my GPS sent us off and running. Apparently while we were heading east there was a horrible snow storm on our tail that we completely missed. The only poor driving condition with which we had to contend was a thick-as-pea-soup fog. It really was stupid of us not to pull over – but we were anxious for Washington.

And we made it without incident with just enough time to check in, change, and head out to the headquarters of the archdiocese for vespers. The military chapel was really quite small, maybe able to hold 100 people squeezed in. There is no cathedral for this archdiocese whose territory is world wide – wherever servicemen serve. The chapel, the archbishop pointed out, was made more beautiful because of articles from the Diocese of Cleveland that experienced so many closing as of late. Mass, nonetheless is said there every day for all of those in the military.

Prayer consisted of vespers and exposition and benediction of the Blessed Sacrament. Choir members from the national shrine were there to sing and it was glorious. I was surprised at the amount of Latin and the quality of the music both in selection and execution – from the opening “O Salutaris” by Thomas Tallis (1505-1585) to the closing “Ave Regina Caelorum” that was taken up loudly by all present. The Archbishop spoke rousingly about the need for chaplains in the military and how difficult it is to get Catholic chaplains to Catholic soldiers. The military will not allow deacons, nuns, brothers, sisters, or interested lay people act as chaplains because a chaplain of any denomination must be able to do everything that a minister of that denomination can do. So a denomination without a sacramental system (most of them) can have just about anybody roll in as chaplain. But since Catholics have a sacramental system and not everyone can hear confessions for example, we are extremely limited in who can act as a chaplain for us. Further the military is moving toward a “chaplain is a chaplain is a chaplain” mentality. So pray for our Catholic military. The semi-good news is that we ran into several young men who are studying to be priests and enter the military service. There are 30 of them in all. The bad news is that it is not nearly enough. The archdiocese pleads with dioceses throughout the states to send more men to serve. Currently, besides the Archbishop, Bishop Neal, Cleveland has two more priests serving in the military.

t day we left for the ordination at the basilica early. I wish I had taken my camera. It had been twelve years since I was there and it would have been nice to share it with you. *sigh*

As I said we were early so we had time to kick around. We prayed in the in the Blessed Sacrament chapel for a spell and then I went to the Our Lady of Brezje shrine (being Slovenian) and prayed a rosary. And since they did not have a St. Sebastian shrine (their loss) and lit a candle for the parish and my loved ones just outside the Slovenian shrine.

The crypt church was turned into a giant sacristy of sorts for the ceremony. As soon as the noon Mass was over large racks of vestments were brought in. As priests showed up they were fitted with a chasuble and then went amongst the pews to vest up.

There is one priest from our diocese that always seems to know where to be at the right time and I noticed him standing off to the side by the stairs and so went to join him. “I was told to line up,” he said. So I stood by him thinking, “Ah! I have an in!” Indeed I was at the very front of the priests processing in. That is not to say that I was at the front of the line – the servers, seminarians, scores of Knights of Columbus were processing first and reached the sanctuary before I ever left the staircase!

The mighty pipe organ joined a small orchestra to fill the cavernous church with music. Many people from Cleveland were there, all kinds of knights in various uniforms, and of course many of our military personnel in their dress uniforms. As we reached the main steps we bowed, walked up to the altar and reverenced (kissed) it, and then were led by M.C.s to our seats.

But wait! The first people in line did not have the best seats! No! We had THE VERY WORST! Oh pride! Oh selfishness! I sat so far back in the sanctuary that I might as well stayed home and watched it on T.V. for all I could see! (Of course you can’t get Communion on T.V.) But not being able to see did have its advantages. It also meant that I could not BE seen and so was able to gaze around at the building to see what there was to see and not have to worry about not looking proper.

Before we began they presented the colors and we sang the National Anthem. (That’s the first time I did that at the beginning of Mass.) And unlike the Supper Bowel everyone here knew the words.

The music was very classical and clever. For example the Gloria was a mix of the traditional Latin chant and polyphony. So the people were able to sing the chant part and then 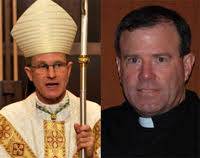 the choir would blossom into some lovely choral piece for some measures and then back and forth to and from chant. It was quite effective.

I wish I could tell you more but it would only be things that I heard until we processed out. First in; first out! And we hit the crypt church, changed, and took off in order to miss the traffic – and still we got home around midnight.

On the way home a black car went wizzing past us as if we were standing still. It had Ohio license plates that read, “DIOCESE.” “Could that be our bishop?” we wondered. We tried to catch up to see but he was far too fast, tail gaiting, zipping in and out of traffic. “Oh! Are we going to make fun of him!” we thought. Then in Ohio we pulled into a gas station and there was the car with diocese license plates! We walked over to make comment and then discovered it was not only not the bishop but nobody connected with the Catholic Church. It would have made a great story though.
Posted by Fr. V at 6:46:00 AM

WHat a coincidence that you should mention the chapel being made more beautiful because of items from the Diocese of Cleveland. I had the great fortune to attend a men's retreat in Pendleton, Oregon last weekend. Bishop Vasa and Cardinal Burke were also in attendance. We stopped by St. Mary's Church there (the sponsors of the retreat), and they have a beautiful sanctuary. The altars came from St. Ladislaus parish in Lorain. You can see the reassembled altars here.

Father, thanks for clearing up the DIOCESE license plate. I saw that car some time ago and thought, that really seems out of place. The truth be told!